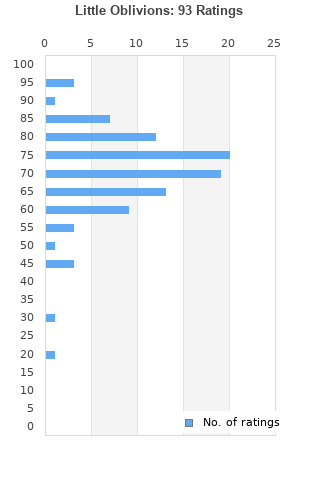 Little Oblivions is ranked 3rd best out of 3 albums by Julien Baker on BestEverAlbums.com.

The best album by Julien Baker is Sprained Ankle which is ranked number 2771 in the list of all-time albums with a total rank score of 555. 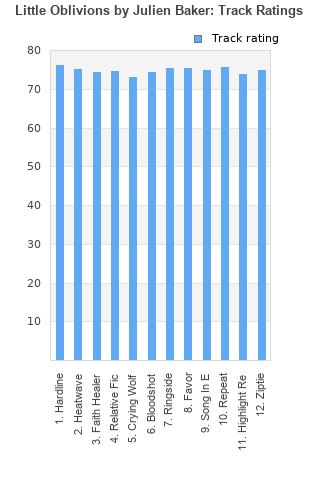 Rating metrics: Outliers can be removed when calculating a mean average to dampen the effects of ratings outside the normal distribution. This figure is provided as the trimmed mean. A high standard deviation can be legitimate, but can sometimes indicate 'gaming' is occurring. Consider a simplified example* of an item receiving ratings of 100, 50, & 0. The mean average rating would be 50. However, ratings of 55, 50 & 45 could also result in the same average. The second average might be more trusted because there is more consensus around a particular rating (a lower deviation).
(*In practice, some albums can have several thousand ratings)
This album has a Bayesian average rating of 71.9/100, a mean average of 70.7/100, and a trimmed mean (excluding outliers) of 71.8/100. The standard deviation for this album is 12.4.

Despite the promising debut, this was a mild let down. It took everything that made her previous attempt special and threw it out the window. Going bigger and fancier acts distracting and we lose the privilege we were so generously offered, getting to look straight at her naked soul. Inoffensive, easy on the ear, good enough for background music, but nothing more than that.

The Phoebe Bridges analogy is undeniable and unsurprising with the two regular being collaborators over the past few years. ‘Little Oblivion’s’ feels a million miles from Bakers sparse and brittle debut from 6 years prior with a more lush and slick mix whilst retaining the sad lyrical content resulting in mixed results and a nice release rather than the killer breakthrough album Bridges gave us in 2020

However, keep Julien Baker on your radar because I believe her masterpiece is just around the corner

Way above average record. Real use of melody and instrumentation. I liked it.

(It's a Julien Baker album, it's a good album. One of the contenders for the championship belt of badass sad sack songwriters comes back with a whole lot more production punch than she had on her last couple albums. The result is a lush, at times overly so, but mostly gorgeous album that will absolutely have you sobbing in solidarity with her if you aren't careful.)

This is easily my most anticipated album of 2021 thus far. I adore Julien's debut Sprained Ankle, and, while I found her second album considerably less cathartic and powerful, I still quite liked it.

From her first 2 albums I felt that As a songwriter Julien is pretty miserable, not like she's bad, I mean she is very VERY good at just completely expressing utter despair and self-loathing like few songwriters I've ever heard. This is perhaps the main feature and most obvious aspect of her music in her career thus far. This aspect is so much on the forefront that sometimes I think her other strengths are overlooked. Lyrically she does know how to plunge the knife in and then twist it for maximum effect. Melodically she isn't an all time great, but she generally can write a good hook and a good and memorable melody. And she knows how to make just a very consistent and engaging emo album to sob along with.

In the lead up to this album I was feeling kinda meh and in the dumps and as a result I was very eagerly anticipating this album. When I heard it the night it was dropped I was initially lukewarm. Then I woke up and listened a couple more times and I started to warm to it a bit more. Now as I write this and I listen yet again, I am starting to really quite like it.

The obvious change in her production is what is probably going to get the most ink. And for good reason. Cuz this album is indeed MUCH more adorned with big synth parts and walls of electric guitar and keyboard and just a lot of embellishments that are trotting along beside Julien's familiar emotional voice and songwriting themes. This upscaling of musical...stuff... is generally well done. What the album clearly loses in terms of that intimacy and cathartic power that her first album had, it gains in terms of just a lot of beautiful moments of epic earcandy. The absolutely badass chorus of "Heatwave" is something that just couldn't happen without the new production angle and to say it works in enhancing the emotional punch of the song would be an understatement. There are other moments when the increased production touches work quite amazingly alongside Julien's songs.

There are also songs which feel somewhat overproduced and made me briefly miss that stripped down sound featured in "Sprained Ankle". An example of this arguably over-adorned style somewhat hampering the impact of a song is on "Relative Fiction". That song for me is good but coulda been great if not for those damn silly percussion sounds. Maybe that touch will grow on me, but for now I don't love it, feels a bit much especially with the big bass sounds and the several guitars also being layered on top of it with Baker's vocals also being multitracked, idk it just kinda rubs me the wrong way.

Still, the hits here and the overarching feel and flow of the album are indeed fabulous and there are some pristine and incredible moments sprinkled on this album. Tracks like "Heatwave", "Hardline", "Ringside", "Song In E", "Ziptie" are very powerful songs that are some of her best in her career thus far. While I don't love this like I love her debut, I think its a better album than her sophomore album and its great having a new Julien Baker album in my life to absorb when I'm feeling like my whole world has been bled of meaning and color. She's one of the best singer/songwriters of her generation and this album is quite solid and already has that familiar warmth connected with it in my mind that will make me revisit it often over the next long while.

"Blacked out on a weekday
Still something that I'm trying to avoid
Start asking for forgiveness in advance
For all the future things I will destroy
That way I can ruin everything
When I do, you don't get to act surprised
When it finally gets to be too much
I always told you you could leave at any time"

While her songwriting is still wonderful, the album is cluttered and convoluted with over-produced instrumentations. Less is more, and that was what worked so well for Baker before. Don't think this album is as effective as her previous because of it.

Your feedback for Little Oblivions