May I Sing With Me (studio album) by Yo La Tengo 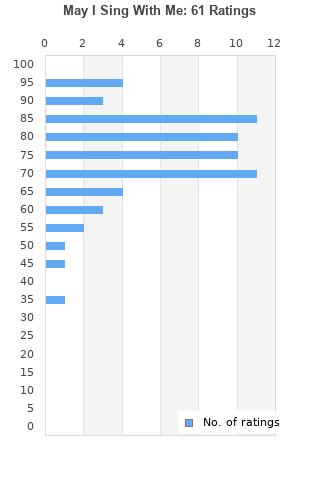 Yo LA Tengo MAY I sing with ME LONG BOX Alias GEORGIA Hubley IRA Kaplan YLT
Condition: Very Good
Time left: 20d 12h 38m 6s
Ships to: Worldwide
$20.20
Go to store
Product prices and availability are accurate as of the date indicated and are subject to change. Any price and availability information displayed on the linked website at the time of purchase will apply to the purchase of this product.  See full search results on eBay

May I Sing With Me is ranked 8th best out of 25 albums by Yo La Tengo on BestEverAlbums.com.

The best album by Yo La Tengo is I Can Hear The Heart Beating As One which is ranked number 446 in the list of all-time albums with a total rank score of 4,404.

Listen to May I Sing With Me on YouTube 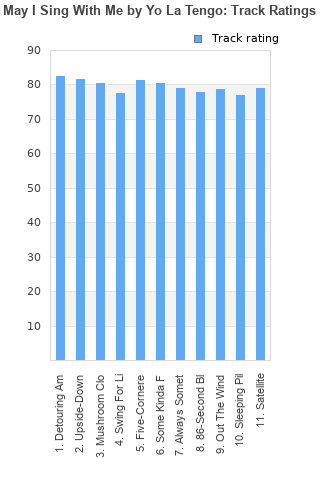 May I Sing With Me rankings

May I Sing With Me collection

May I Sing With Me ratings

Rating metrics: Outliers can be removed when calculating a mean average to dampen the effects of ratings outside the normal distribution. This figure is provided as the trimmed mean. A high standard deviation can be legitimate, but can sometimes indicate 'gaming' is occurring. Consider a simplified example* of an item receiving ratings of 100, 50, & 0. The mean average rating would be 50. However, ratings of 55, 50 & 45 could also result in the same average. The second average might be more trusted because there is more consensus around a particular rating (a lower deviation).
(*In practice, some albums can have several thousand ratings)
This album is rated in the top 9% of all albums on BestEverAlbums.com. This album has a Bayesian average rating of 76.0/100, a mean average of 75.7/100, and a trimmed mean (excluding outliers) of 76.5/100. The standard deviation for this album is 12.9.

May I Sing With Me favourites

May I Sing With Me comments

Fantastic album...the extended intro to the opening song sounds like a great lost Field Mice track. Some really great guitar workouts on this album which just has a great feel to it.

This was the album in which Yo La Tengo began maturing into the band they are today. It was the first to feature the current lineup and the first of their string of albums I would all call "great" (to be clear, this string of great albums continues today, over 20 years later). YLT had some great material before this, but their albums only began becoming consistently solid with May I Sing With Me. This album featured considerable more noise rock than their later output, but all the best parts of YLT are showcased throughout the record. Favourites here include "Detouring America With Horns", "Five Cornered Drone", "Out the Window", and the perfectly apt "86 Second Blowout".

This album is a triumph of folk-rock melody and garage-rock guitar noise which skillfully navigates a maniacal violence and a delicate contemplation. The group are not frightened of exploring ideas in their music. Yo La Tengo are one of the most important groups of the '90s and 'May I Sing With Me' is their best and most complete album.

Your feedback for May I Sing With Me