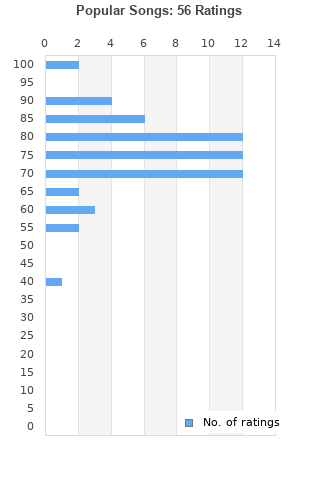 Popular Songs is ranked 9th best out of 26 albums by Yo La Tengo on BestEverAlbums.com.

The best album by Yo La Tengo is I Can Hear The Heart Beating As One which is ranked number 446 in the list of all-time albums with a total rank score of 4,273. 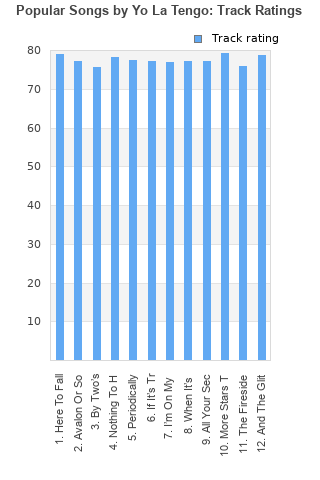 Rating metrics: Outliers can be removed when calculating a mean average to dampen the effects of ratings outside the normal distribution. This figure is provided as the trimmed mean. A high standard deviation can be legitimate, but can sometimes indicate 'gaming' is occurring. Consider a simplified example* of an item receiving ratings of 100, 50, & 0. The mean average rating would be 50. However, ratings of 55, 50 & 45 could also result in the same average. The second average might be more trusted because there is more consensus around a particular rating (a lower deviation).
(*In practice, some albums can have several thousand ratings)
This album is rated in the top 9% of all albums on BestEverAlbums.com. This album has a Bayesian average rating of 75.8/100, a mean average of 75.6/100, and a trimmed mean (excluding outliers) of 76.3/100. The standard deviation for this album is 10.3.

best tracks: nothing to hide, if it's true

Don't let the condensed tracklisting fool you, this album picks up where I Am Not Afraid of You left off and is just as sprawling. With songs veering in almost every direction the band has ever explored, Popular Songs is coming from a band oozing with confidence in who they are as a band. Highlights range from the gentle "I'm On My Way", to the droning "More Stars Than There Are In Heaven", to the classic YLT noiserock of "And the Glitter Is Gone". This is band that just keeps going and is here to stay.

Your feedback for Popular Songs