Parachute (album) by The Pretty Things 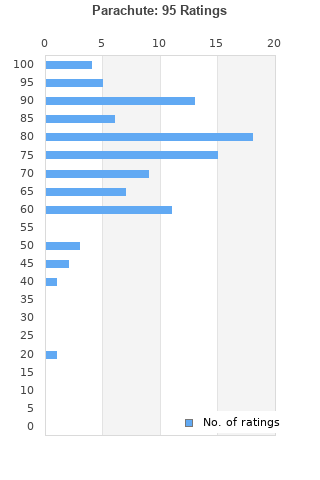 PARACHUTE (UK IMPORT) VINYL LP NEW
Condition: New
Time left: 1d 2h 34m 25s
Ships to: Worldwide
$28.94
Go to store
Product prices and availability are accurate as of the date indicated and are subject to change. Any price and availability information displayed on the linked website at the time of purchase will apply to the purchase of this product.  See full search results on eBay

Parachute is ranked 2nd best out of 25 albums by The Pretty Things on BestEverAlbums.com.

The best album by The Pretty Things is S.F. Sorrow which is ranked number 923 in the list of all-time albums with a total rank score of 2,019. 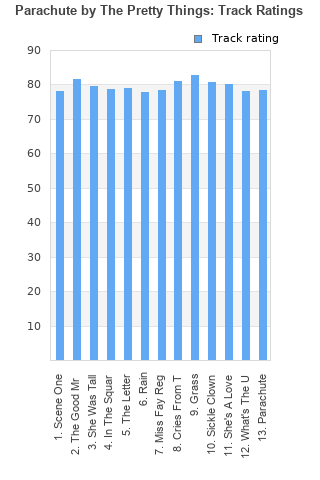 Rating metrics: Outliers can be removed when calculating a mean average to dampen the effects of ratings outside the normal distribution. This figure is provided as the trimmed mean. A high standard deviation can be legitimate, but can sometimes indicate 'gaming' is occurring. Consider a simplified example* of an item receiving ratings of 100, 50, & 0. The mean average rating would be 50. However, ratings of 55, 50 & 45 could also result in the same average. The second average might be more trusted because there is more consensus around a particular rating (a lower deviation).
(*In practice, some albums can have several thousand ratings)
This album is rated in the top 7% of all albums on BestEverAlbums.com. This album has a mean average rating of 76.0/100. The trimmed mean (excluding outliers) is 77.0/100. The standard deviation for this album is 15.4.

Weak vocals, a terrific 1967 album in 1970, nothing resembling a hit. But all of that is why they will never overplay any of it on classic rock stations or in diners, leaving it untrampled for your own esoteric enjoyment, and in that context, it's a great album and all of the flaws I mentioned become virtues.

The best Pretty Things album. I love SF Sorrow but the first time I heard this record I was hooked. I can’t compare it to anything else as it is unique, not a concept album per se, but feels like one.

One of my all time favorites and one of the greatest rock albums ever. The first six tracks blend one into the other seamlessly. Grass is the standout track for me.

I think this is The Pretty Things best album, alongside "SF Sorrow". This is a concept album of sorts, it's the anti-Sgt. Pepper. It has a dark pessimistic mood that incapsulates the late sixties decadence of inner cities.

Your feedback for Parachute