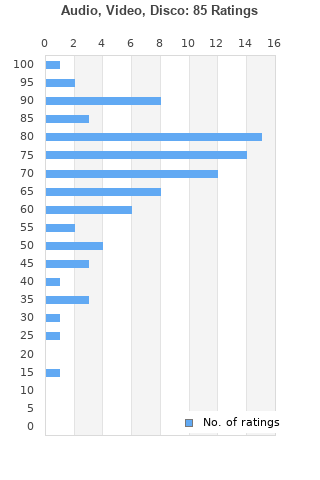 JUSTICE-Audio, Video, Disco CD NEW
Condition: Brand New
Time left: 3d 8h 11m 47s
Ships to: Worldwide
$20.89
Go to store
Product prices and availability are accurate as of the date indicated and are subject to change. Any price and availability information displayed on the linked website at the time of purchase will apply to the purchase of this product.  See full search results on eBay

Audio, Video, Disco is ranked 2nd best out of 6 albums by Justice on BestEverAlbums.com.

The best album by Justice is † (Cross) which is ranked number 1078 in the list of all-time albums with a total rank score of 1,713. 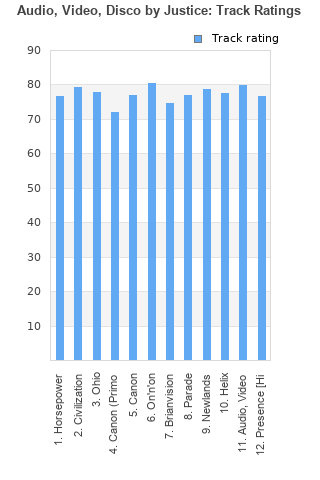 Rating metrics: Outliers can be removed when calculating a mean average to dampen the effects of ratings outside the normal distribution. This figure is provided as the trimmed mean. A high standard deviation can be legitimate, but can sometimes indicate 'gaming' is occurring. Consider a simplified example* of an item receiving ratings of 100, 50, & 0. The mean average rating would be 50. However, ratings of 55, 50 & 45 could also result in the same average. The second average might be more trusted because there is more consensus around a particular rating (a lower deviation).
(*In practice, some albums can have several thousand ratings)
This album has a Bayesian average rating of 70.5/100, a mean average of 69.4/100, and a trimmed mean (excluding outliers) of 70.1/100. The standard deviation for this album is 16.9.

At first I was disappointed, like most, that this wasn't as game changing as their cross debut. But upon later listens, I learned to appreciate it as a solid body of electronic/disco work. They could never do what they did the first time around. They influenced a whole new genre(s) and generation of music. Here, they just kept doing what they love and didn't try anything too crazy, played it safe. And that's actually okay sometimes.

When Justice debuted, the easiest way to describe them was "like Daft Punk, but heavier." It was electronic music of the variety that favored synth melodies peaking with a heavy bass drop. But where Daft Punk seemed more technicolor, Justice was all darkness. So now, the easiest way to describe Audio, Video, Disco is to say it's "like Justice, but with way more guitar." Parts of this album are absolutely huge; I defy you not to drum along.

This album is a brutal phenom!!!, I bought it by accident beacuse I kind of enjoyed D.A.N.C.E. plus I liked the cover and it blew my mind. It's more than just the brutal energy it has, at some points the mixture of their sound with guitar riffs out of nowhere and the magnificent voices remind me of great experimental acts like Daft Punk (certain songs of the Discovery) and a particular act called Ratatat (the first half of the album is like the twin brother of their album "Classics"), in a couple of weeks this has become one of my faves this year, it has no week points and just keeps going, amazing surprise...

It only took me two and a half spins to really get into this album. For people expecting Cross 2.0, you're going to be let down a little, but for people who are looking for a little change from their artists after a four year layover, I think this will be right up your alley. Justice breaks out the guitars in this one, especially in the second half of the album. The track Newlands sounds like something AC/DC or The Who might have produced in their day (maybe not in the vocals, but in the music for sure.) Parade leans more towards rock as well. However, for those who still need their hard electronic fix, there's the hit track Civilization and the awesome Canon, which might be the best song on the whole thing. The only knock I have on the album is just how much you can point out how it sounds like other artists. Air, Daft Punk, Gorillaz (Re: Canon), and even Beach Boys at parts. But that's a minor quibble. Overall, this is one of the strongest albums of the year.

Your feedback for Audio, Video, Disco