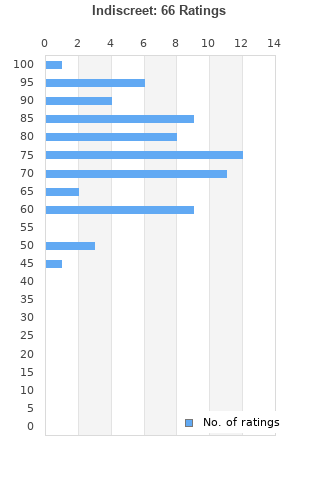 Indiscreet is ranked 4th best out of 37 albums by Sparks on BestEverAlbums.com.

The best album by Sparks is Kimono My House which is ranked number 974 in the list of all-time albums with a total rank score of 1,908. 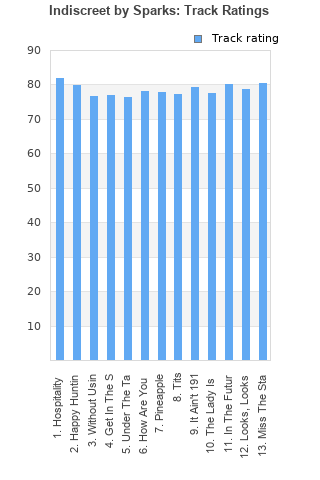 Rating metrics: Outliers can be removed when calculating a mean average to dampen the effects of ratings outside the normal distribution. This figure is provided as the trimmed mean. A high standard deviation can be legitimate, but can sometimes indicate 'gaming' is occurring. Consider a simplified example* of an item receiving ratings of 100, 50, & 0. The mean average rating would be 50. However, ratings of 55, 50 & 45 could also result in the same average. The second average might be more trusted because there is more consensus around a particular rating (a lower deviation).
(*In practice, some albums can have several thousand ratings)
This album is rated in the top 8% of all albums on BestEverAlbums.com. This album has a Bayesian average rating of 75.8/100, a mean average of 76.2/100, and a trimmed mean (excluding outliers) of 76.2/100. The standard deviation for this album is 12.0.

Sparks is by far the best and most consistent glam rock band. There's a vibrancy that only a couple other artists came close to replicating. I also particularly enjoy Tony Visconti's production on this album, man is a genius.

I enjoy 70s rock because there was no limitations. Crazy elaborate album covers, colored vinyl, complicated time signatures, songs an entire album side, etc. Nothing was too crazy, possibly drug induced decision making, but you can’t deny the wealth of classic albums created during this decade. This is one of those albums. Wouldn’t get made today unless funded by themselves and sold on the internet, however it’s a marvel of styles juxtapositioned throughout the entire track listing. A few artists that could be compared are 10CC, Ween, Godley and Creme, Tubes...but ultimately this is all Sparks. Terrific set of songs, nothing has gotten boring or outdated with time cannot recommend more to anyone bored with the same old same old.

Thumbs up on this one. Sure it's very dated, but "In the Future" is great fun to listen to!

Your feedback for Indiscreet