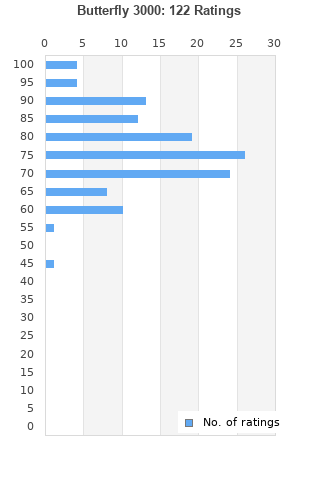 Butterfly 3000 is ranked 10th best out of 30 albums by King Gizzard & The Lizard Wizard on BestEverAlbums.com. 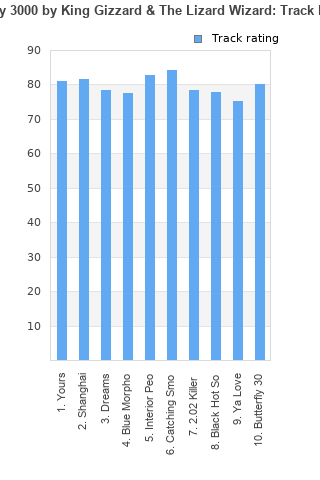 Rating metrics: Outliers can be removed when calculating a mean average to dampen the effects of ratings outside the normal distribution. This figure is provided as the trimmed mean. A high standard deviation can be legitimate, but can sometimes indicate 'gaming' is occurring. Consider a simplified example* of an item receiving ratings of 100, 50, & 0. The mean average rating would be 50. However, ratings of 55, 50 & 45 could also result in the same average. The second average might be more trusted because there is more consensus around a particular rating (a lower deviation).
(*In practice, some albums can have several thousand ratings)
This album is rated in the top 6% of all albums on BestEverAlbums.com. This album has a Bayesian average rating of 76.3/100, a mean average of 76.4/100, and a trimmed mean (excluding outliers) of 76.7/100. The standard deviation for this album is 10.5.

* Favorite tracks: Yours, Shanghai, Blue Morpho, Interior People, Catching Smoke
* Least favorite tracks: Ya Love
* Starts of really strong, but much slower and less interesting toward the end
* A lot of catchy melodies throughout
* I wish KG&LW integrated some stranger, psychedelic notes into the ultra-colorful pop songs

Hadn't listened to King Gizzard for a while, and had been somewhat away from their newest release expecting more of the same, but this surprised me a lot! It's different from everything they've done yet it maintains that King Gizzard-ness

Another impressive performance from KGLW. Still don't understand how than can make things of this quality so fast. Not that it's amazing but its pretty good and a good deal different from their last few albums.

KGATLW get into Electropop. And really early electropop too. It sounds so 1981. They bring a unique take to each genre they go for and I really like what they do.

With this one they moved more in a psychedelic pop direction and I honestly love it. This is my favorite project of theirs in quite some time.

King Gizzard have somehow kept their personality while making a complete shift in sound. This album is extremely pleasant, dreamy, and, as expected, psychedelic.

Your feedback for Butterfly 3000