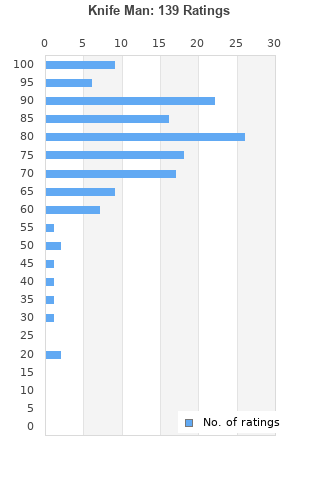 Andrew Jackson Jihad (AJJ) - Knife Man LP (Picture Disc) vinyl NEW! Asian Man
Condition: New
Time left: 24d 1h 38m 16s
Ships to: Worldwide
£22.00
Go to store
Product prices and availability are accurate as of the date indicated and are subject to change. Any price and availability information displayed on the linked website at the time of purchase will apply to the purchase of this product.  See full search results on eBay

Knife Man is ranked as the best album by Andrew Jackson Jihad. 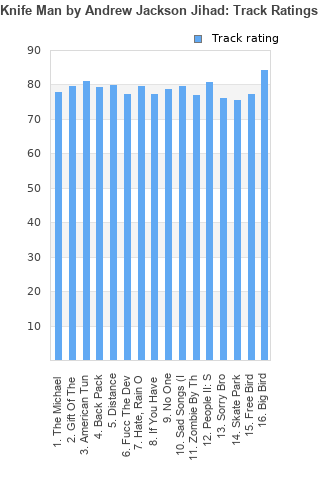 0
11.
Zombie By The Cranberries By Andrew Jackson Jihad
Rating: 77 (21 votes)Comments:

Rating metrics: Outliers can be removed when calculating a mean average to dampen the effects of ratings outside the normal distribution. This figure is provided as the trimmed mean. A high standard deviation can be legitimate, but can sometimes indicate 'gaming' is occurring. Consider a simplified example* of an item receiving ratings of 100, 50, & 0. The mean average rating would be 50. However, ratings of 55, 50 & 45 could also result in the same average. The second average might be more trusted because there is more consensus around a particular rating (a lower deviation).
(*In practice, some albums can have several thousand ratings)
This album is rated in the top 2% of all albums on BestEverAlbums.com. This album has a Bayesian average rating of 78.9/100, a mean average of 78.0/100, and a trimmed mean (excluding outliers) of 79.3/100. The standard deviation for this album is 15.0.

A very raw and visceral album that explores the human condition and human emotions in an honest and earthy fashion.

This is my favorite album to listen to when I'm really depressed. And my favorite AJJ album. And top 10 of all time for me.

This album is amazing in its own...very unusual way.

The more I listen to this, I just can't stop. It's so refreshing to hear an artist just fucking telling it like it is. There's music that's depressing, and there's music that's honest, but rarely do the too seem to correlate. Depressing music always is so dreary and seems more intent on creating an atmosphere than being relatable. And honest music always seems to be holding back so as not to embarrass the writer. But this is where both meet: this album says things that I thought only I could possibly relate to. It says things that seem to come from such a forsaken, hopeless place that I can't help but smile. "Hate, rain on me" is such a dismal sentiment but someone it's turned into a rallying cry to say "screw you" to all the haters and everyone who's disrespected you. Backpack seems to be a completely fictional song, but it's got real power for someone who's lost a friend and doesn't know where to turn. The intro track is such a great analogy too. "His laziness built the pyramids." Beautiful. Gift of the Magi 2 almost sounds like a parody of the band but someone manages to be moving as well. People II 2 is the best rallying cry of the lot though I think. Depression is such a real problem but it's hard to communicate as such, and this song is like a verbal description of depression. "But hope is for presidents and dreams are for people who are sleeping." How can words that are so grim be so comforting? Actually the last track might be the most moving. "I'm afraid of the things I want to do but I won't." Now there's a rallying cry. I'm such a lazy person that I know I won't accomplish even the simple things that I want. "I'm afraid that I've somehow caused my family harm." Stop saying the things I think!

Besides the lyrics, this album also finds the band expanding their musical portfolio. There are electric guitars and backing strings and all kinds of things going on. There's a perfect climax near the end of Big Bird that just pulls the whole album's experience together. I think you really have to have heard the band's first few albums to really appreciate the sound of this one and how it has evolved.

Also, this album saved my life, so that's pretty cliché.

Your feedback for Knife Man