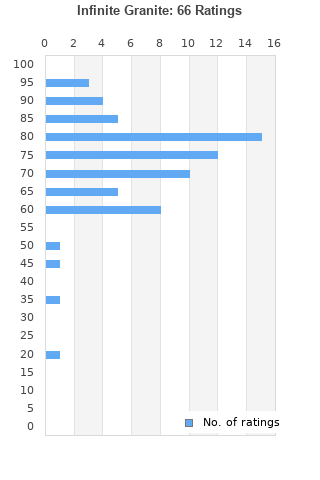 Infinite Granite is ranked 4th best out of 8 albums by Deafheaven on BestEverAlbums.com.

The best album by Deafheaven is Sunbather which is ranked number 491 in the list of all-time albums with a total rank score of 3,813. 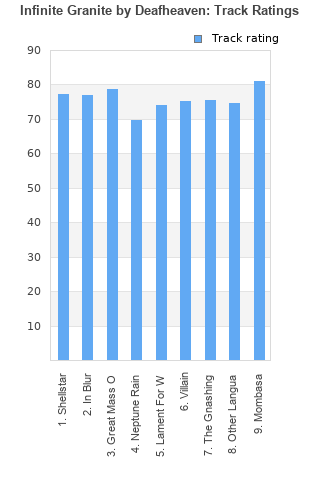 Rating metrics: Outliers can be removed when calculating a mean average to dampen the effects of ratings outside the normal distribution. This figure is provided as the trimmed mean. A high standard deviation can be legitimate, but can sometimes indicate 'gaming' is occurring. Consider a simplified example* of an item receiving ratings of 100, 50, & 0. The mean average rating would be 50. However, ratings of 55, 50 & 45 could also result in the same average. The second average might be more trusted because there is more consensus around a particular rating (a lower deviation).
(*In practice, some albums can have several thousand ratings)
This album has a Bayesian average rating of 74.0/100, a mean average of 73.3/100, and a trimmed mean (excluding outliers) of 74.2/100. The standard deviation for this album is 13.6.

I would love nothing more than for Deafheaven's foray into dreamier, Foals-adjacent rock to work. I don't know if the stylistic shift is just a bit limited, or if the songwriting isn't really there. What I know is that the only times I'm locked into this album are when their songs climaxes, particularly in the last track where they go into full black metal, particularly at the end of the last track, where everything finally clicks into place. The rest is decent, but fully un-involving.

Post-Hardcore noise rock in 2021. It's nice enough, bit I wouldn't personally put this in the top albums of 2021.

The band evolution finally has reached this point. As musician, I think is the natural and obvious path, regardless if we like it or not. Good album tho, overall good production and consistency. Good album to start listening to Shoegaze/Dream Pop.

I’ve been a huge Deafheaven guy since they blew me away with ‘Sunbather’ some 8 years post & through ‘New Bermuda’ and ‘Ordinary Corrupt..” they have been a staple of my regular musical diet. As such I have been tracking this 2021 release for the past 18 months and from the get go the word has consistently been it’s different , fans be warned

So here it is ‘ Infinite Granite’ and yes different it is , I was expecting as much but to actually finally hear the 180 degree turn is simply jarring. Gone completely are the deep Black Metal vocals and heavy heavy guitars instead replaced with swirling dream pop that harkens back to 1990’s bands such as Swervdriver, Ride, Lush and Slowdive

To fully appreciate this album you need to play a trick of the mind and the trick is DONT think about Deafheaven when you listen to this album simply think as if its a band you’re hearing for the very first time. Music wise I quite like it being partial to the Dream Pop gene since funny enough the 90’s

It’s as simple as that

Your feedback for Infinite Granite