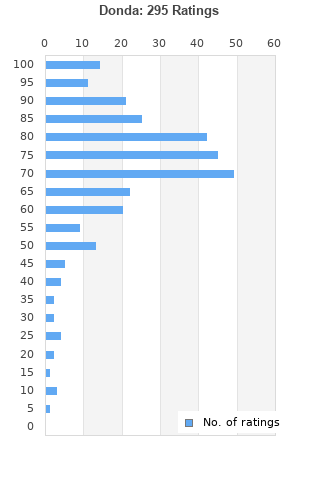 Donda is ranked 9th best out of 14 albums by Kanye West on BestEverAlbums.com.

The best album by Kanye West is My Beautiful Dark Twisted Fantasy which is ranked number 32 in the list of all-time albums with a total rank score of 30,478. 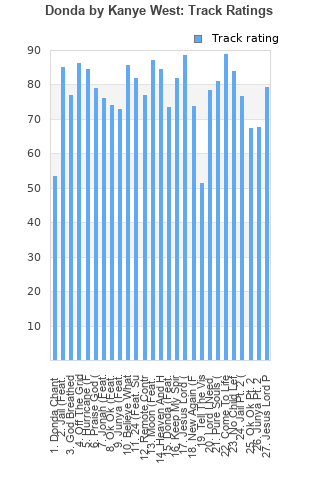 Rating metrics: Outliers can be removed when calculating a mean average to dampen the effects of ratings outside the normal distribution. This figure is provided as the trimmed mean. A high standard deviation can be legitimate, but can sometimes indicate 'gaming' is occurring. Consider a simplified example* of an item receiving ratings of 100, 50, & 0. The mean average rating would be 50. However, ratings of 55, 50 & 45 could also result in the same average. The second average might be more trusted because there is more consensus around a particular rating (a lower deviation).
(*In practice, some albums can have several thousand ratings)
This album has a Bayesian average rating of 72.6/100, a mean average of 72.0/100, and a trimmed mean (excluding outliers) of 72.6/100. The standard deviation for this album is 17.5.

“Donda” is stuck in the middle of an awkward transition. It’s clear that Kanye was in the middle point between making another Christian album and returning to secular music. It’s for this reason you get the larger redemption theme juxtaposed with the features and verses. The profanity is removed with heavy handed censoring that does nothing to obscure what is actually being said. It would have made more sense to just request clean verses from the features. The features are a mixed bag with some adding greatly to the album and others not. Kid Cudi adds to redemption theme on “Moon” with his heartfelt verse but then you have Marilyn Manson’s strange presence on “Jail Pt. 2”. There is a great verse on “Jesus Lord” but the vast majority of bars are quite poor. In particular, Jay Z’s “Made in the image of God, that's a selfie” is atrocious. The album is also far too long. 23 songs is tough on its own but the four second parts at the end really send it. “Donda” has some strengths, the production and instrumentation is fantastic. The beats are lush and a clever variation of church music and trap. Each track is given a unique focused flavor. If the whole album was given this focus perhaps it could find the redemption it preaches.

I am feeling left out because I never got to 'Feat.' on this album.

Kanye has just released ‘Donda Deluxe Edition’ with five additional tracks and a run time nudging a hefty 2.5 hours. Good lord ! I thought the original album was the Deluxe version

Echoing other comments: if {Jail, Off The Grid, Hurricane, Moon, Jesus Lord, Come to Life} were released as an EP we'd be talking about how this was a comeback Kanye record.

There's a B+ record in here but too much bloat. This will be like College Dropout where I revisit it but have to play hot potato to get around the stuff I don't need to listen every time I visit the record.

There is a great album in the middle of this bloated project too much songs that I skip for it to have a better rating.

Much better than I expected it to be but really nothing special. So many three-quarter-baked ideas it's nauseating. It is a somewhat natural progression given his previous releases. It sounds like what he had been working towards before whatever the hell happened with Jesus Is King. Structurally the album is a joke. For one, it's censored. If you can't get your point across without swearing then fucking swear Kanye don't just mute your bad words it sounds awful. Secondly, it's completely unnecessarily long. Pick one version of the song dude. There isn't any reason that all 23 of these original songs need to be included either. Kanye does not care about the listeners opinions or time for better and worse. Nobody else but Kanye can get away this shit. Again, it's better than I expected but I had very low hopes to begin with.

On paper this was going to be a bad album, following a spell of average music (Life of Pablo being his only good launch in the last 5 years) a crazy run time, some questionable collaborations and a messy launch. But Donda delivers. The first track, Jail, reignites Kanye's long standing partnership with Jay Z, and hits as hard as the best parts of Watch the Throne. Jay's nod to pulling Kanye back from his self destructive bent of vocally supporting Trump is a particularly nice moment.

There are many high points, Moon is standout and a surprisingly delicate and beautiful song, Jesus Lord is some of his best story telling and feels like something that could have been lifted from Good Kid Mad City. and Hurricane a solid colab with the Weeknd which has some of the best hooks of the album.

All in all a return to form despite the bloated run length...could have done without the 'part 2' versions of some of the songs at the end and ended instead with No Child Left Behind, which is another strong song and feels like a natural end point (especially as the album is already well over a hour long by that point!)

I think this album suffers from the same symptoms as Mellon Collie and the infinite sadness. It is so long, and unnecessarily stuffed with mediocre songs, that it's tough to accurately judge how good the highlights are. Frustratingly, like Mellon Collie, if the artist would have shown some restraint and left more on the cutting room floor, I think this would universally be thought of as the best album of the year. Still quite good, nonetheless.

Also, I think the highlights on the album have been spoken about well enough here, I don't have much to add. But, I will say that 'God Breathed' deserves a bit more love than it's getting. That pulsating baseline combined with the ambient vocal yells is pretty mesmerizing. Also, it's clever in the way it constantly feels as though it's building to a crescendo where there may be an explosion of drums at the end similar to something like 'Love Lockdown'.. but then it just never comes, in a way keeping the listener on their toes a bit.

(I am a Kanye fan and a relatively big one. So take my general liking to borderline love of this album with that in minbd. Its an overstuffed mess with more filler than most albums have actual music, but within this 109 minute beast there is an LP of brilliance that I love. Religious Kanye at his best.)

I will say that this album confuses me. There is, to my ears, a huge amount of middling tracks here that don't do much for me. And yet due to its length there is still an album's worth of absolutely beautiful and excellent tracks. The highs outnumber and outshine the lows, with a few tracks being some of my favorite of the year by any artist (Jesus Lord, Moon, Keep My Spirit Alive, Lord I Need You, Come to Life, and No Child Left Behind are the best ones in my book.) Also in terms of flow of album, after a first half which mostly underwhelmed me, there is a run of tracks that is almost faultless from track 10 to 23. And I am not even thinking of the Part 2s as part of the album. They are just remixes or different versions of songs earlier in the album proper and so I am not even holding them against or for the qualities of the album and I am mostly looking at them as bonus tracks and not at all logical or useful to include.

I find this album moving, and beautiful and despite not being a christian, I am at times truly touched by the more religious and transcendent tracks here. I find the arc of Kanye's dioscography fascinating. He's brilliant and probably the greatest musical artist of the last 20 years if I had to pick. The way he goes from perfectly executed hedonism in MBDTF, to angsty, schizo, noisy brilliance in Yeezus to a strange mix of that hedonism, anger and a new religious spirituality in The Life of Pablo, to suicidal and lost uncertainty and introspection in Ye to the pure christianity of Jesus Is King to this album, a much better and more moving and fleshed out take on his Christian faith as well as his album-length tribute to his Mother and his Lord.... its just fascinating and it makes the whole sweep of his discography more enjoyable than even the very very impressive individual parts.

I am kind of sort of babbling and I don't have much else to say. Jesus Lord is a masterpiece and is one of my all time fave Kanye tracks and this album is half meh, and half Genius. I put it behind The Life of Pablo, MBDTF, Late Reg, College Dropout, Yeezus and Kids See Ghosts. I put it at the top of his other non-classic albums - so just ahead of 808s, Ye, Watch The Throne and way ahead of Jesus is King. Damn, writing that out just now just made me feel newly a deep appreciation for this man's discography. Amazing 17 year run of music we have been gifted with as music fans.

Your feedback for Donda