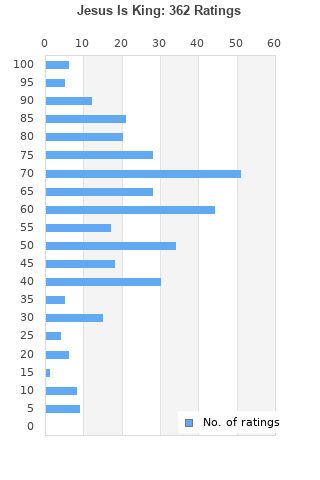 Jesus Is King is ranked 9th best out of 10 albums by Kanye West on BestEverAlbums.com.

The best album by Kanye West is My Beautiful Dark Twisted Fantasy which is ranked number 34 in the list of all-time albums with a total rank score of 33,045. 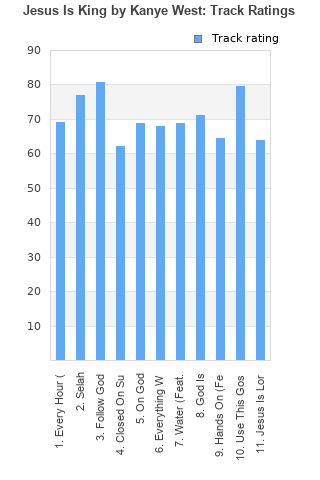 Outliers can be removed when calculating a mean average to dampen the effects of ratings outside the normal distribution. This figure is provided as the trimmed mean. A high standard deviation can be legitimate, but can sometimes indicate 'gaming' is occurring. Consider a simplified example* of an item receiving ratings of 100, 50, & 0. The mean average rating would be 50. However, ratings of 55, 50 & 45 could also result in the same average. The second average might be more trusted because there is more consensus around a particular rating (a lower deviation).
(*In practice, some albums can have several thousand ratings)
This album has a mean average rating of 64.0/100. The trimmed mean (excluding outliers) is 64.3/100. The standard deviation for this album is 18.7.

Showing latest 10 comments | Show all 28 comments | Most Helpful First | Newest First
(Only showing comments with -2 votes or higher. You can alter this threshold from your profile page. Manage Profile)

By far Kanye's worst effort. An album about God made by Kanye West would naturally end up being about himself and that's what we have here. Lyricism is just godawful, pun intended.

I mean, the chik fil A bars? Lets be honest, if Logic or Hopsin said that it would be the worst bars of 2019. Kanye shouldn't get a pass just because of his cult of personality, sorry. And its so sparse instrumentally. The lyricism is absolutely a focus.

Mix is shitty and rushed. Production is meh in my opinion. Yeah, it sounds crisp, but Kanye's been stuck on his gospel-inspired minimalism since The Life of Pablo. Production is about a crisp sound but its also about making creative choices and progressing as an artist.

This is repetitive choirs, rapping over no beat, and generally sparse songs. For an album that is trying to be as dramatic as it is, there needs to be more here. The songs don't build up or go anywhere, and really bank off of sounding "dramatic" just by having a choir. A TON of emphasis on hooks -- like he wants to be Drake.

He's been artistically stagnant on his solo releases for three albums now, no sonic progression. And with the Lyrics being as bad as they are here, its an all around mediocre project.

This will be highly regarded for years to come, for better or worse..but I have a feeling the praise will only grow.

I've had a change of heart. Look, the production on this is great imo but Kanye's albums always have great production. The more I listen to this, the more hollow I think it is. After all the wait, I think we deserved more from Kanye. JIK isn't as bad as some say but it had the potential to be so much more.

The whole thing feels rushed. I don't get how Kanye can make everyone wait years for his music then release something like this. The beats are actually pretty good but the vocals sound terrible on almost every song. I don't even mean the subject matter, it sounds like everything was recorded through a tin can and a piece of string. Even after his "fixes" it still sounds bad. "Everything We Need" sounds the best to me and I don't even like it that much. Concerning the subject matter, I can't help but be skeptical about the sincerity of this project. It's a very surface level exploration of the gospel that may mean something to other people but not much to me. It's nice to hear that he's found peace but his rhetoric about why Jesus is great and what do to do live in his light is poor. I'm being cynical but he doesn't seem as serious about religion as he claims to be. It seems like something he's into for the time being and this seemingly low-effort album is the product of that.

It made me cry countless times, its so good that made me go back to the church. Im hist biggest fan, but i didnt like at all his last album, so now it feels like he made up for that.

It's a great record! There are some circumspect vocal performances and lyrics and cringe moments but this is a lot of really cool musical concepts packed into 26 minutes. I don't expect this will be critically acclaimed either from the secular or christian media and it is a very challenging record to appreciate but that's not a reflection of the musical quality. If you're a fan of Kanye and especially of his more recent "short-form" records and enjoy the format, it's worth checking this out.

Listened once. Some jams, still too early to tell how I rate it

‘Use This Gospel’ and ‘Follow God’ are the best songs imo

Somehow this works. I have to admit, eventhough I was very excited, I was also very pessismistic about this album but WOW!
Kanye has done it once again, this is simply an incredible album!
The whole atmosphere of the album and the setting works incredibly well, the gospel influence works much better than I expected and Kanye's singing has never been better.
What's not to like about this album seriously? 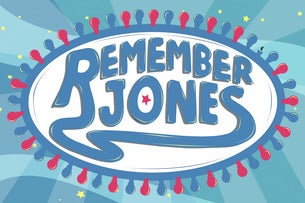 Your feedback for Jesus Is King