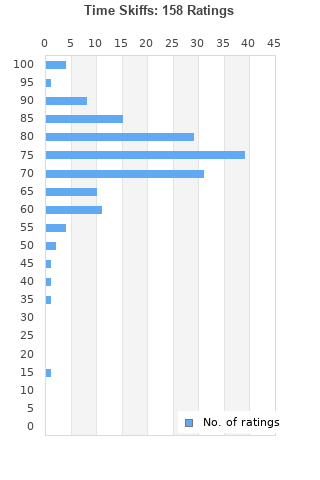 Time Skiffs is ranked 9th best out of 28 albums by Animal Collective on BestEverAlbums.com.

The best album by Animal Collective is Merriweather Post Pavilion which is ranked number 125 in the list of all-time albums with a total rank score of 13,424. 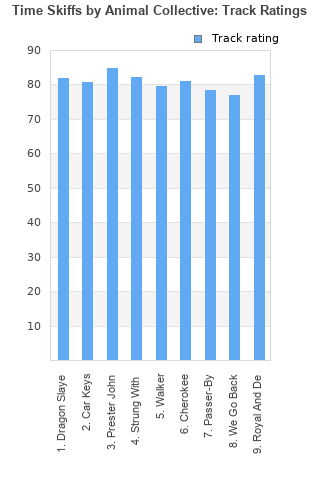 Rating metrics: Outliers can be removed when calculating a mean average to dampen the effects of ratings outside the normal distribution. This figure is provided as the trimmed mean. A high standard deviation can be legitimate, but can sometimes indicate 'gaming' is occurring. Consider a simplified example* of an item receiving ratings of 100, 50, & 0. The mean average rating would be 50. However, ratings of 55, 50 & 45 could also result in the same average. The second average might be more trusted because there is more consensus around a particular rating (a lower deviation).
(*In practice, some albums can have several thousand ratings)
This album is rated in the top 7% of all albums on BestEverAlbums.com. This album has a Bayesian average rating of 76.1/100, a mean average of 76.4/100, and a trimmed mean (excluding outliers) of 76.4/100. The standard deviation for this album is 8.7.

Time Skiffs is pretty good. It demonstrates that Animal Collective, after all these years, know how to make Animal Collective songs. Songs are a little bit on the longer side, some overstaying their welcome and others not. Ultimately, it's a pretty tame nostalgia release, which I'd find a lot more endearing if we hadn't spent the last decade listening to a barrage of derivative copies of Avey Tare and Panda Bear's sound. Because this isn't especially radical, and the production being kinda sanitary, it almost sounds like time skiffs is just another in this chain of vacuous release – just better executed because after all it is the real thing.

It's been a long time since I enjoyed an AnCo album as much as Time Skiffs. The album starts off strong with Dragon Slayer and Car Keys, but it really gets going with Prester John, Strung With Everything, and Cherokee; all three of which are among the band's best tracks to date. It dips every so slightly with Passer-By and Ways to Go, before closing with one of the best tracks on the album, Royal and Desire (which is reminiscent of early Fleet Foxes). While not quite up there with Feels, Strawberry Jam, or Merriweather Post, Time Skiffs is easily the band's most consistent album — possibly their best album — in the last decade. Really enjoyed this one.

This a very consistent album as there is no real weak track and they are all pretty decent. However, it is lacking real attention grabbing songs that keep you interested and I do find a lot of the songs out stay their welcome a little. There is a lot of great musicianship on here, that really makes you nostalgic for their older stuff. It is mostly unique and different to their previous work though so I have to give them credit for their desire for experimentation. Royal And Desire and Prester John are fantastic tracks and really elevate this album for me. There is definitely some cutting down needed on this album as it does feel very bloated and getting rid of 10 minutes or so of unnecessary content would make this album so much better. Overall, a good listen with some enjoyable tracks but it falls short of the mark in relation to their previous material.

Your feedback for Time Skiffs