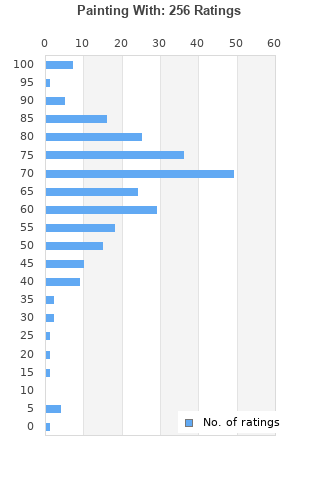 Painting With is ranked 8th best out of 28 albums by Animal Collective on BestEverAlbums.com.

The best album by Animal Collective is Merriweather Post Pavilion which is ranked number 124 in the list of all-time albums with a total rank score of 13,312. 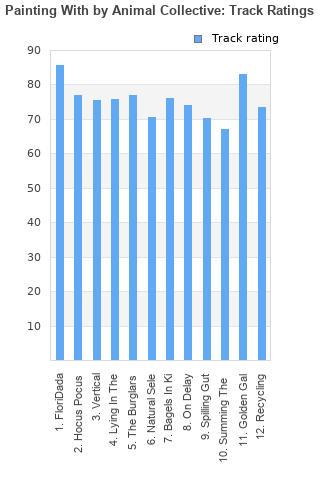 Rating metrics: Outliers can be removed when calculating a mean average to dampen the effects of ratings outside the normal distribution. This figure is provided as the trimmed mean. A high standard deviation can be legitimate, but can sometimes indicate 'gaming' is occurring. Consider a simplified example* of an item receiving ratings of 100, 50, & 0. The mean average rating would be 50. However, ratings of 55, 50 & 45 could also result in the same average. The second average might be more trusted because there is more consensus around a particular rating (a lower deviation).
(*In practice, some albums can have several thousand ratings)
This album has a Bayesian average rating of 67.3/100, a mean average of 65.9/100, and a trimmed mean (excluding outliers) of 67.1/100. The standard deviation for this album is 16.3.

Don't know what everyone else is talking about. Masterpiece. Like it better than Pet Sounds or Smile by the Beach Boys. One day people will actually listen and wake up. LOUD volume helps... maybe headphones? I liked it on vinyl, but it's definitely a very loud punk album. Best not to treat like quiet music, like its predecessor Centipede Hz, embrace the volume and accept its strength.

Inconsistent, but the highs definitely outweigh the lows. Plenty of good moments outside the stellar tracks.

As someone already said, another average album from a overrated band.

Yes Floridada is a great track, but I just don't envision me listening to this 20 years from now (assuming I am not dead by then). There is nothing timeless here

What makes me even more disappointed about this album is that i saw them performing live many tracks from it, without that very annoying bass sound, and that was really great, they just missed it in the studio.

AnCo is my favorite band subjectively speaking, and this release is a much higher point on my mind than 2012's Centipede Hz; but this release has very high points, but is held back by some pretty lousy songs honestly.

I haven't listened to a lot of Animal Collective yet. I remember there was a lot of hype for this album, then it came out and... nothing. I gave it a listen and found it uninteresting. From the reviews I've seen I'm not the only one disappointed by it either.

Because I can't edit my last comment... Apparently the Colin Stetson cameo was in the bridge to Floridada (never even noticed that layer before). Not sure what they sampled in Lying on the Grass. But it's cool either way.

I enjoyed the album and think Golden Gal ranks up with the best AnCo tracks so far.

Your feedback for Painting With