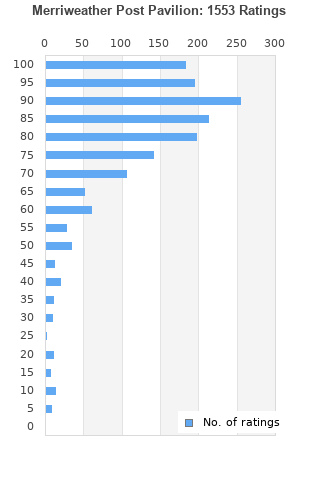 Merriweather Post Pavilion is ranked as the best album by Animal Collective.

Tickets from Ticketmaster Get tickets
May
17
Tue
20:00

Tickets from Ticketmaster Get tickets
May
19
Thu
19:30

Animal Collective with special guest the Spirit of the Beehive
Humphreys Concerts By the Bay, San Diego, United States. 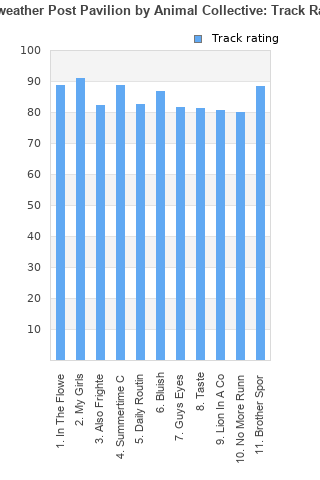 Rating metrics: Outliers can be removed when calculating a mean average to dampen the effects of ratings outside the normal distribution. This figure is provided as the trimmed mean. A high standard deviation can be legitimate, but can sometimes indicate 'gaming' is occurring. Consider a simplified example* of an item receiving ratings of 100, 50, & 0. The mean average rating would be 50. However, ratings of 55, 50 & 45 could also result in the same average. The second average might be more trusted because there is more consensus around a particular rating (a lower deviation).
(*In practice, some albums can have several thousand ratings)
This album is rated in the top 1% of all albums on BestEverAlbums.com. This album has a Bayesian average rating of 81.8/100, a mean average of 80.2/100, and a trimmed mean (excluding outliers) of 81.9/100. The standard deviation for this album is 18.2.

Lyrically, this record covers some important experiences in childhood & parenthood. Vocally, there are some stunning harmonies that evoke The Beach Boys.

Musically, get ready for an hour of droning synth sounds that are repetitive and numbing.

This album is amazing experience and really challenges you right from the first time you listen too it. The start of the album is the real peak and is a perfect blend of psychedelic and pop music. While it can be difficult at times, it is a record that really rewards patience and after a couple listens I just fell in love with the music. However, I do understand the criticisms that it does seem to slow on the back half of the album with some songs not reaching the same levels as songs like In The Flowers. Animal Collective do redeem themselves with a phenomenal closing track in Brother Sport which wraps up the album nicely. Overall, it is an album not to be missed.

Maybe not as profound as most people think it is. A lot of the songs really rely on very little to make the song interesting, it's not exactly fun either.

Fav. Tracks: In The Flowers, My Girls.

That noise in the beginning of “In the Flowers” sounds like Cell from Dragon Ball Z absorbing someone and it grosses me out.

MPP is Animal Collective's masterpiece. Yes, it's not as experimental as some of the earlier albums, which are genus in their own rights, but the songwriting, lush loops, and zeitgeist all combine here to form arguably the most important (and possibly the best) pop album in recent memory.

A fantastic album. I love every song and every sound on it. The album is obviously, strongly influenced by psychedelics. The repetition, the mantras, the uncertainty, the internal arguments, the humor, the lack of chronology, the layered sound; it's like a sonic acid trip. Not only is the sampling and instrumentation mind-blowing but the lyrical themes are incredibly well thought out and clever. It easy to hear how much care was put into this album. Seriously impressive.