Past Masters (compilation album) by The Beatles 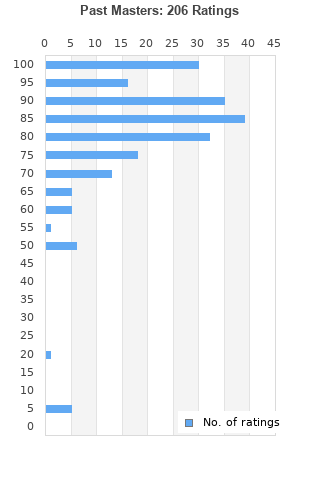 Past Masters is ranked 21st best out of 65 albums by The Beatles on BestEverAlbums.com.

The best album by The Beatles is Abbey Road which is ranked number 3 in the list of all-time albums with a total rank score of 82,778. 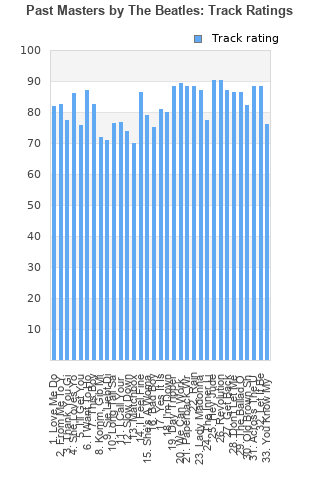 Rating metrics: Outliers can be removed when calculating a mean average to dampen the effects of ratings outside the normal distribution. This figure is provided as the trimmed mean. A high standard deviation can be legitimate, but can sometimes indicate 'gaming' is occurring. Consider a simplified example* of an item receiving ratings of 100, 50, & 0. The mean average rating would be 50. However, ratings of 55, 50 & 45 could also result in the same average. The second average might be more trusted because there is more consensus around a particular rating (a lower deviation).
(*In practice, some albums can have several thousand ratings)
This album is rated in the top 1% of all albums on BestEverAlbums.com. This album has a Bayesian average rating of 84.4/100, a mean average of 82.4/100, and a trimmed mean (excluding outliers) of 85.0/100. The standard deviation for this album is 17.9.

Rain is exceptional. Can't believe it doesn't have a higher rating.

To Jackbrown. Yes, I'm aware those songs are respectively on, A hard day's night, and, Help!, but what I was referring to on that point was, Past masters, as a coherent listening experience. Yes, it mops up the songs not on any 'official' albums, but that's all it does, sonically it's all over the place. This is maybe the only Beatles compilation you need theoretically, but it's too uneven to work as an album. As I said a UK singles album from Love me do, to, Let it be, and their B-sides would be the ultimate Beatles comp which would flow effortlessly and as well as sonically it would also historically be a great listening experience and yes, feature, Can't buy me love, and, Ticket to ride, but technically, as it is, Past masters, is the only essential compilation.

but gary, as you say, the point is to have the songs that weren't released on any albums... your complaints of the lack of "can't buy me love" and "ticket to ride" aren't valid, those songs are on "a hard day's night" and "help".....

this is the best collection of this sort and every compilation should be like this. "best ofs" are pointless.

The problem with past masters is that it does exactly what it says on the tin. It mops up all the band's official songs not released on an album, I.e., singles, b-sides, and e.p tracks. You can't argue with the quality of the music, but it feels insubstantial. The jump of two years between rain, and, lady Madonna, is just sonically uncomfortable. The first disc doesn't really suffer too badly from this, but it still misses out great songs like, can't buy me love, and, ticket to ride. It would have been better if they released a U.K. singles album with all the a and b sides, but then you would miss out on the long tall Sally e.p., bad boy, and the original version of, across the universe. I could live without the German versions of she loves you, and, I want to hold your hand, but the rest is essential. It includes wonderful early b-sides such as, the lovely, I'll get you, which is a personal favourite of mine, and the gorgeous, this boy. Other essentials are Paul's, she's a woman, and the aforementioned, rain. The only problem is, it's not really a coherent listening experience. Still, it's a must have for any Beatles fanatics.

A great collection of songs and a must have for any Beatles fan.

Favourite Songs: Rain, Across The Universe, Lady Madonna, Don't Let Me Down

Some of my favorite Beatles songs are singles that weren't on the albums proper. This is a necessary part of the complete discography.

Past Masters is a fantastic assembly of the Beatles non-album work. Some of their greatest songs are here... If looking at only one - Past Masters 2 is better, but these are available together now.

This should not be a seperate entry. Past Masters 1 and 2 (which already exist on site) were released as seperate albums and should not warrant an additional entry just because they were later sold as a single edition.

Your feedback for Past Masters