Anthology 2 (compilation album) by The Beatles 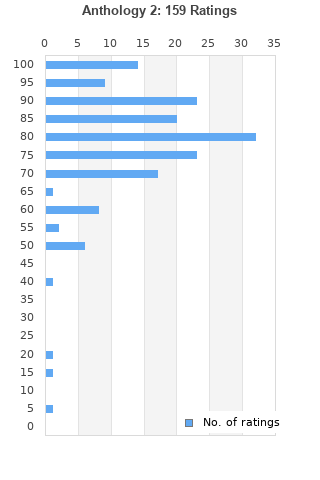 Anthology 2 is ranked 26th best out of 65 albums by The Beatles on BestEverAlbums.com.

The best album by The Beatles is Abbey Road which is ranked number 3 in the list of all-time albums with a total rank score of 76,945. 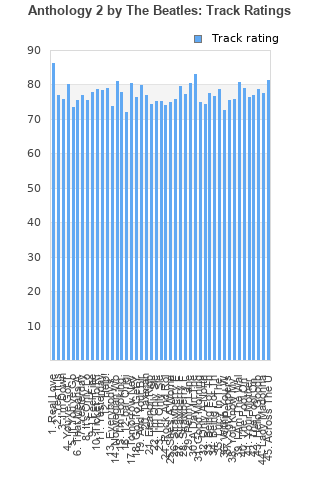 Rating metrics: Outliers can be removed when calculating a mean average to dampen the effects of ratings outside the normal distribution. This figure is provided as the trimmed mean. A high standard deviation can be legitimate, but can sometimes indicate 'gaming' is occurring. Consider a simplified example* of an item receiving ratings of 100, 50, & 0. The mean average rating would be 50. However, ratings of 55, 50 & 45 could also result in the same average. The second average might be more trusted because there is more consensus around a particular rating (a lower deviation).
(*In practice, some albums can have several thousand ratings)
This album is rated in the top 2% of all albums on BestEverAlbums.com. This album has a Bayesian average rating of 80.0/100, a mean average of 79.1/100, and a trimmed mean (excluding outliers) of 80.4/100. The standard deviation for this album is 15.5.

This series is a must have for any serious Beatles fan.

Lennon joins the Traveling Wilburys!
Great unreleased recordings, its like sitting in the studio ....

An interesting glimpse into the Beatles' songwriting process and attention to detail.

This album has high and low parts, as the takes of Strawberry Fields are totally mind blowing, it has also boring parts that go nowhere

Bought these albums when they came out amid the euphoria of the anthology tv series and the 2 new songs. Must say though that all 3 of these albums are only for Beatles fans, not the casual listener. To be honest hadn't listened to it for about 15 years until last week as if you want to listen to the Beatles, you listen to the finished albums, not the out-takes. Saying that, I love the early take of Hello, Goodbye on here before they stripped out the extra Guitar part.

Probably my favorite of the Anthology series because it has Real Love and many demos from my favorite Beatles era (1965-1966).

Your feedback for Anthology 2