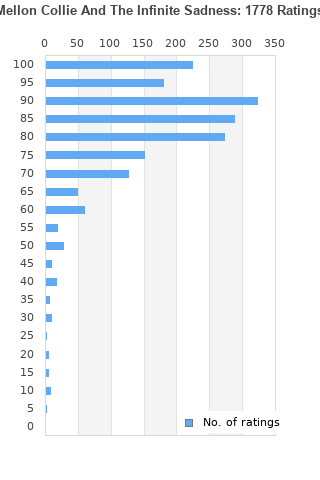 Mellon Collie And The Infinite Sadness is ranked 2nd best out of 22 albums by The Smashing Pumpkins on BestEverAlbums.com.

The best album by The Smashing Pumpkins is Siamese Dream which is ranked number 54 in the list of all-time albums with a total rank score of 22,078.

Listen to Mellon Collie And The Infinite Sadness on YouTube 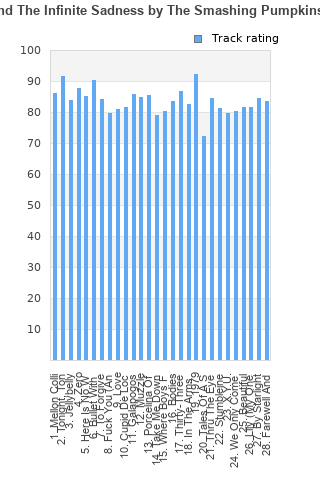 Rating metrics: Outliers can be removed when calculating a mean average to dampen the effects of ratings outside the normal distribution. This figure is provided as the trimmed mean. A high standard deviation can be legitimate, but can sometimes indicate 'gaming' is occurring. Consider a simplified example* of an item receiving ratings of 100, 50, & 0. The mean average rating would be 50. However, ratings of 55, 50 & 45 could also result in the same average. The second average might be more trusted because there is more consensus around a particular rating (a lower deviation).
(*In practice, some albums can have several thousand ratings)
This album is rated in the top 1% of all albums on BestEverAlbums.com. This album has a Bayesian average rating of 83.2/100, a mean average of 81.9/100, and a trimmed mean (excluding outliers) of 83.2/100. The standard deviation for this album is 15.2.

First off, it’s so damn long. I was getting tired of it, looked down, and saw that there were still 15 minutes remaining in *the first album*. Tedious.

Second, the music is quite good. Guitars and drums alternate between powerful drive and delicate artfulness. The band uses unusual instruments (e.g., the harp) in a way that sounds right and not contrived.

Third, Billy Corgan can’t sing. He just can’t. He’s perpetually flat and tries to do weird things with his voice to mask the fact he can’t hit the right tones. 4 minutes of that is hard to take. 2 hours is like what death row must feel like.

Fourth, this might be the most cynically angry set of lyrics I’ve ever heard. I have no problem with people who are naturally cynical, nor do I mind singers who are naturally angry. This feels like someone decided that angst was selling well, so let’s go ahead and force fit some lyrics into that template.

It's a little bit too long in truth. If they had cut out some of the filler and reduced the album to slightly longer than a regular length LP, I'd rate this much higher as there are some great songs. My highlights are 1979, Bullet With Butterfly Wings, By Starlight (my favourite Pumpkins song) and Tonight Tonight.

This album is a little bit self-indulgent at times, and there is certainly some filler. But realistically, there is a reason the singles here were huge.

This album has no right to be this long, especially since many of the songs aren’t great.

An absolutely legendary rock opera, and a staple album of the 90s. The run time is initially daunting, but I find myself getting lost in how well it all melds together that it just passes the time.

Both sides have really high highs, love 1979, We Only Come Out At Night, Zero, and Porcelina just to name a short few.

Your feedback for Mellon Collie And The Infinite Sadness