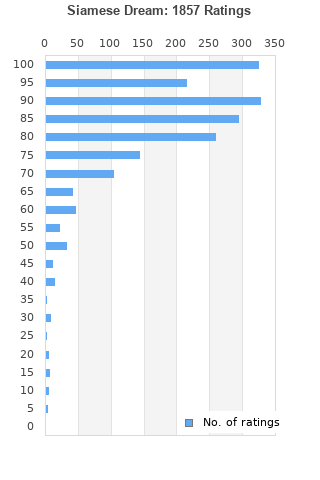 Siamese Dream is ranked as the best album by The Smashing Pumpkins. 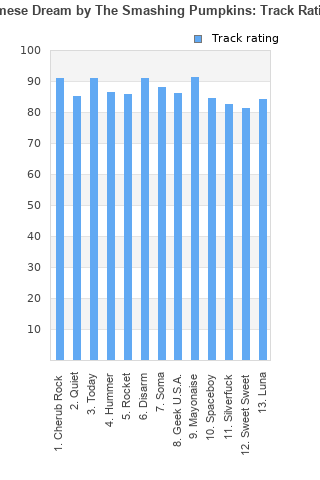 Rating metrics: Outliers can be removed when calculating a mean average to dampen the effects of ratings outside the normal distribution. This figure is provided as the trimmed mean. A high standard deviation can be legitimate, but can sometimes indicate 'gaming' is occurring. Consider a simplified example* of an item receiving ratings of 100, 50, & 0. The mean average rating would be 50. However, ratings of 55, 50 & 45 could also result in the same average. The second average might be more trusted because there is more consensus around a particular rating (a lower deviation).
(*In practice, some albums can have several thousand ratings)
This album is rated in the top 1% of all albums on BestEverAlbums.com. This album has a Bayesian average rating of 84.6/100, a mean average of 83.8/100, and a trimmed mean (excluding outliers) of 84.7/100. The standard deviation for this album is 14.8.

Quite possibly the best alternative rock album of this era. An incredibly talented band that were able to showcase different sides to their style and sound. Many bands have taken on an aspect from the album and based a whole career on it; this band could do it all.

Some brilliant tracks on this album - Rocket (one of my all-time favourites), Hummer, Today and the beautiful Mayonaise. The other half of the album leaves a lot to be desired though, with Geek USA and Silverfuck (14 mins in total) especially not really hitting the mark. But overall a very enjoyable album by a brilliant band, despite its inconsistency.

First time listening in probably 25 years. Aged better than expected. I don’t know how to handle albums where I know that the amount of production involved is so high. In other words, this album sounds so, so, so much better than the Smashing Pumpkins do in concert. Good songwriting, if sometimes silly (space boy don’t kill me).

When I was younger, Melancholy was the Smashing Pumpkins album to get into. In my adult years, I've come to Siamese Dream, which I think is actually the better record.

Smashing Pumpkins' technicolor take on the early nineties grunge movement was a success, and is a nice complement to the more musically brooding work of Nirvana, Pearl Jam, Alice in Chains, and even the Pumpkins' own Mellon Collie and the Infinite Sadness. The lyrics on Siamese Dream often convey a sense of irony, as in "Today," whose famous refrain "Today is the greatest day I've ever known" contrasts with the suicidal ideation conveyed in the verses. The album reflects the feelings of alienation and disaffectation so emblematic of the early nineties.

definitely, big surprise for me. Great album, with his own spirit, great songs. sound of guitar, drums - great!

I like a number of the songs on this highly regarded album, but nothing else hits me like the first track.

Your feedback for Siamese Dream