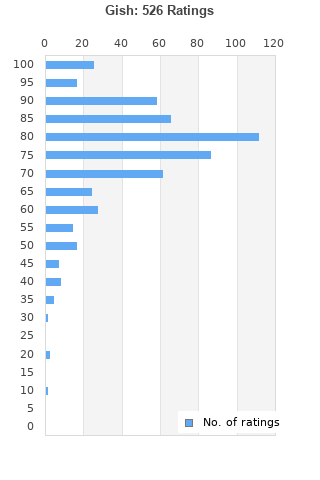 Gish is ranked 4th best out of 22 albums by The Smashing Pumpkins on BestEverAlbums.com.

The best album by The Smashing Pumpkins is Siamese Dream which is ranked number 54 in the list of all-time albums with a total rank score of 21,815. 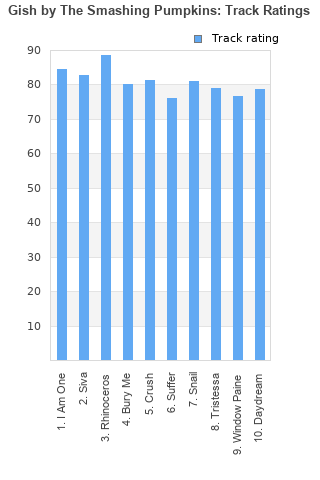 Rating metrics: Outliers can be removed when calculating a mean average to dampen the effects of ratings outside the normal distribution. This figure is provided as the trimmed mean. A high standard deviation can be legitimate, but can sometimes indicate 'gaming' is occurring. Consider a simplified example* of an item receiving ratings of 100, 50, & 0. The mean average rating would be 50. However, ratings of 55, 50 & 45 could also result in the same average. The second average might be more trusted because there is more consensus around a particular rating (a lower deviation).
(*In practice, some albums can have several thousand ratings)
This album is rated in the top 6% of all albums on BestEverAlbums.com. This album has a Bayesian average rating of 76.6/100, a mean average of 76.3/100, and a trimmed mean (excluding outliers) of 76.7/100. The standard deviation for this album is 13.9.

This is a lot weaker than the groups two masterpieces but you can see the potential of a great band hidden amongst the songs. Tracks like Rhinoceros and I Am One prove this and are the closest we get to classic pumpkins. The album is pretty consistently frantic and energetic the whole way through as well. Other than that the record feels very bland and a bit of a mess. No other song really stands out and the instrumentation feels a bit weaker. It is too long as well and always drags for me. There is no pull to this album either and I never really feel like returning to it. Overall, quite a weak Pumpkins album that isn't really worth the listen.

Not as good as Siamese Dream and Mellon Collie, but a must-listen for any fan of rock and particularly grunge. My highlights are Daydream, I am One and Crush.

its has its moments

In regards to the bookend albums to the pumpkins' two masterpieces, Adore blows Gish out of the water.

Decent album. Great start and end, but lacking a bit in the middle.

Favs: I Am One, Gish, Bury Me, Tristessa, Window Paine, Daydream

I take back what I said - Bury Me, Crush, Snail, & Tristessa are just as awesome as the first three songs... Window Paine and Suffer are just okay... Still liked it better when Billy had long hair.

Awesome beginning of their career. 8/10.

A pretty kickass album, not a bad song on here, yet it is not as memorable as the Pumpkin's later two albums. Still a great debut; the fast brash songs and the slower songs are all great together, great chemistry for an album.

Underrated album. Their earlier psychedelic period never got the full credit it deserved, this album just straight up rocks.

Your feedback for Gish