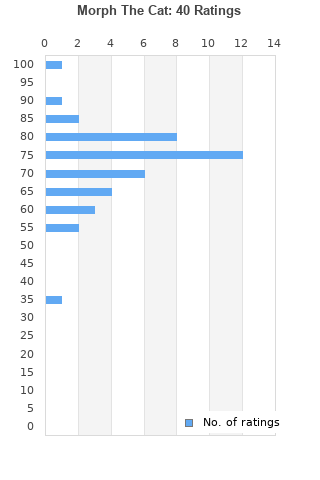 Morph The Cat is ranked 4th best out of 5 albums by Donald Fagen on BestEverAlbums.com.

The best album by Donald Fagen is The Nightfly which is ranked number 667 in the list of all-time albums with a total rank score of 2,799. 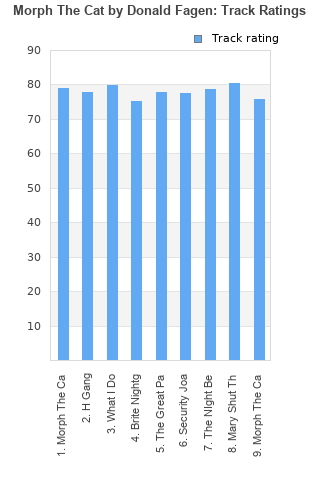 Rating metrics: Outliers can be removed when calculating a mean average to dampen the effects of ratings outside the normal distribution. This figure is provided as the trimmed mean. A high standard deviation can be legitimate, but can sometimes indicate 'gaming' is occurring. Consider a simplified example* of an item receiving ratings of 100, 50, & 0. The mean average rating would be 50. However, ratings of 55, 50 & 45 could also result in the same average. The second average might be more trusted because there is more consensus around a particular rating (a lower deviation).
(*In practice, some albums can have several thousand ratings)
This album has a Bayesian average rating of 73.3/100, a mean average of 72.4/100, and a trimmed mean (excluding outliers) of 73.4/100. The standard deviation for this album is 10.8.

"Morph the Cat" from 2006, is Donald Fagen's third solo album. Apart from the absence of Steely Dan's partner Walter Becker, the musicians are almost the same as on Steely Dan's latest album from 2003 "Everything Must Go". The sound is thus not surprisingly very similar to Steely Dan's, and as Fagen also takes care of the vocals in the group, it can be difficult to detect differences between Steely Dan and Fagen solo.

There is for me something indefinable magic that often is missing on solo albums. This applies to some extent also in this case, although I obviously respect and accept that album was very well received and even awarded a Grammy.

As always, most of Fagen lyrics are very interesting and have a substance that gives rise to interpretation and reflection. This is particularly true of the songs on "Morph the Cat" while I find many of the actual songs somewhat less interesting than those on Steely Dan's albums. Musically these sangs can be ghard to distinguish from each other and for me it is very much the lyrics that makes me able to tell them apart.

Songs I want to highlight are "Morph the Cat", "The H Gang" and "The Night Belongs to Mona", that all have lyrics that give food for thought, while musically they are also among the most interesting. Also the lighter "Security Joan" is an uplifting acquaintance, which proves both twinkle in his eye and humor with Fagen; You might call Fagen’s bid for a new "Lovely Rita".

Your feedback for Morph The Cat