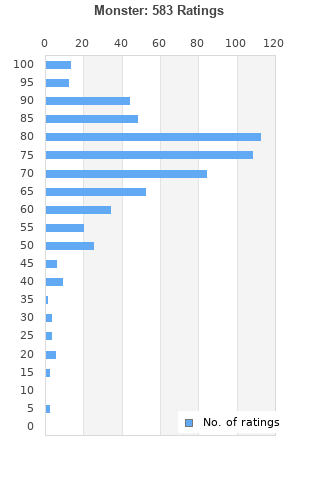 Monster is ranked 8th best out of 35 albums by R.E.M. on BestEverAlbums.com.

The best album by R.E.M. is Automatic For The People which is ranked number 52 in the list of all-time albums with a total rank score of 21,458. 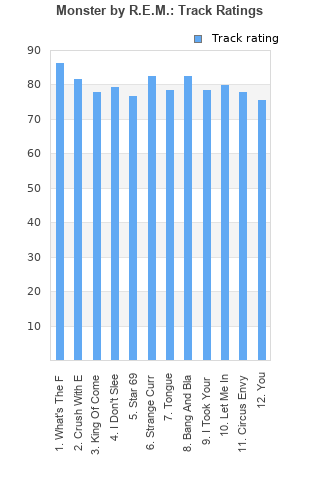 Rating metrics: Outliers can be removed when calculating a mean average to dampen the effects of ratings outside the normal distribution. This figure is provided as the trimmed mean. A high standard deviation can be legitimate, but can sometimes indicate 'gaming' is occurring. Consider a simplified example* of an item receiving ratings of 100, 50, & 0. The mean average rating would be 50. However, ratings of 55, 50 & 45 could also result in the same average. The second average might be more trusted because there is more consensus around a particular rating (a lower deviation).
(*In practice, some albums can have several thousand ratings)
This album has a Bayesian average rating of 73.3/100, a mean average of 72.1/100, and a trimmed mean (excluding outliers) of 73.3/100. The standard deviation for this album is 14.9.

Underrated . Should be higher in the REM discography .

Not their best, but still contains some good tracks. My highlights are Tongue, Strange Currencies and What's the Frequency Kenneth?

Popular commentary writes that when ‘Monster’ came out in 1994 R.E.M were the biggest band on the planet coming on the back of breakthrough ‘Out Of Time’ (1991) and mega smash ‘Automatic For The People’ (1992), I’m not sure they were they were numero uno in 94 (hello U2 calling) but they were very big so anticipation for ‘Monster’ was palpable. The masses wanted more mandolins, long time fans (me) wanted a return to the political fire and brimstone ala ‘Document’ so what did we get ? Rock sure but glam rock and overt sexuality? We didn’t see that coming and TBH at the time it was pretty jarring so I moved onto other artists such as Jeff Buckley (‘Grace’); Green Day (‘Dookie’); Pearl Jam (‘Vitalogy’). It literally took me years to come to grips with the new direction of my favourite band but eventually circle back to ‘Monster’I did, time as they say heals all wounds

These 12 tracks are a real mixed bag which includes some of R.E.M’s finest moments (“What’s The Frequently Kenneth” / “Let Me In”/ “Strange Currency’s”) an out and out stinker (“King Of Comedy”) and everything else falling somewhere in between. The Tremolo does wear out its welcome towards the end and producer Scott Litt has pretty much said as much with his 2019 remix of ‘Monster’ dialling it waaaaaaay down and sounding much improved on the original 1994 release

2. “Circus Envy” and “Box Cars” were both inspired from the same scene in the movie Elephant man, which happens to be one of Stipes all time favourite movies

3. A verse in “Circus Envy” lyric literally suggests climbing a tree and defecating upon some poor individual

4. “What’s The Frequency Kenneth” is an analogy for confusion, a confused older person trying to understand the younger generation

5. “Strange Currencies” has been criticised for sounding too similar to “Everybody Hurts” , which in my opinion is valid criticism but rejected by R.E.M

6. “Let Me In” (written by Stipe about Kurt Cobain) was recorded with Mike using a fender that was previously owned by Cobain. It was given to the band by Courtney. This same fender was used when playing this track live on the Monster World Tour ( ‘Automatic For The People’ was found in the greenhouse where Kurt died and was probably the last music he ever heard) . Peter Buck and his wife were living next door to that very house in the house in Seattle

8. “I can’t really listen to that one, its just so weird , I think what the hell were we doing “? Mike Mills reflects on “King Of Comedy”. Yep !

9. “ What’s The Frequency Kenneth” slows down towards end, during the recording Mike Mills became sick with appendicitis and slowed the tempo down due to illness , the band played along and ultimately left the slowed section in the released version

10. Michael Stipe first shaved his head for the Monster album and was a shock to critics and fans alike

I like this album, their is a lot of good music on it. The two weakest tracks are Tongue and You.

The new (2019) mix increased my enjoyment of the album, mostly by turning up Michael Stipe's vocals, adding them extra clarity and presence. He's too good a singer to bury in the mix.

What's the Frequency, Crush and Bang and Blame are great tracks and these three dominate the album. Grungy sludgy feedback drenched rock that lacks the songwriting of the previous two albums and also not as good as New Adventures in HiFi.

I have a lot of respect for this band they showed a lot of guts releasing a straight up rock record and it totally rocks. Although they gave us a taste of what was coming with Drive on the previous album. A lot of good tracks but nothing beats the 1 2 punch.

Your feedback for Monster