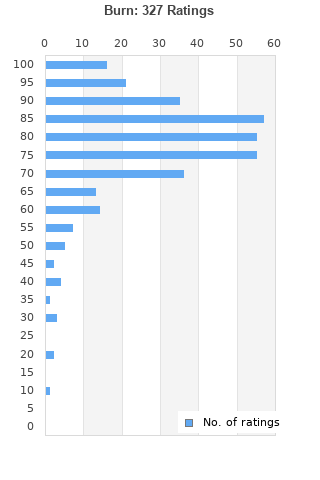 DEEP PURPLE "Burn" P-1287W / 1974 JAPAN orig. 1st edition 7" single / EXCELLENT+
Condition: Used
Time left: 2h 2m 8s
Ships to: Worldwide
$30.00
Go to store
Product prices and availability are accurate as of the date indicated and are subject to change. Any price and availability information displayed on the linked website at the time of purchase will apply to the purchase of this product.  See full search results on eBay

Burn is ranked 4th best out of 59 albums by Deep Purple on BestEverAlbums.com.

The best album by Deep Purple is Machine Head which is ranked number 268 in the list of all-time albums with a total rank score of 7,406. 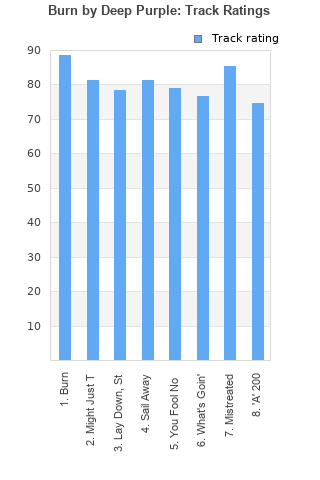 Rating metrics: Outliers can be removed when calculating a mean average to dampen the effects of ratings outside the normal distribution. This figure is provided as the trimmed mean. A high standard deviation can be legitimate, but can sometimes indicate 'gaming' is occurring. Consider a simplified example* of an item receiving ratings of 100, 50, & 0. The mean average rating would be 50. However, ratings of 55, 50 & 45 could also result in the same average. The second average might be more trusted because there is more consensus around a particular rating (a lower deviation).
(*In practice, some albums can have several thousand ratings)
This album is rated in the top 3% of all albums on BestEverAlbums.com. This album has a Bayesian average rating of 78.8/100, a mean average of 77.8/100, and a trimmed mean (excluding outliers) of 79.0/100. The standard deviation for this album is 14.7.

This version of Deep Purple may not have lasted long, but it was worth it just for this album.

Top tracks: Burn, Mistreated, You Fool No One

This is the best album with Coverdale and Hughes. The new voices compliment each other very good even though I prefer Hughes vocals if I have to choose. More progressive than earlier albums, less funky than later albums.

A great album by Deep Purple Mark 2. I see that opinions are mixed on who was the better vocalist. Personally I think it comes down to individual preference. I certainly think that this and 'Stormbringer' sound even better now than they did back when they were released, possibly part of that is my musical taste maturing. Without a doubt David Coverdale brought a new lease of life to Purple when Gillan left. Equally Gillan made 'In Rock' and 'Machine Head' albums that will hold legendary status. As far as this album goes, the title track is a personal favourite.

Decent album. Coverdale's vocals are good, but I prefer Ian Gillan's with Deep Purple. A good, solid offering. Nothing great here, but nothing awful either.

One of the first albums I owned - and all these years later it is still one of my top favourites!

I'll take Coverdale over Gillan every time. "Burn" may be the best Heavy Metal song ever. Perfect riff, perfect solo...and a one word chorus that never fails. I have played this song thousands of times and it never gets old. The rest of the album is great too. Particularly "Sail Away" and "You Fool No One." Martin Birch was one of the first producers who understood how to record this kind of music and get it right. Clear...but with lots of bite in the guitars. Purple's best record...and I love Machine Head as much as the next guy. This is better.

The title track is amazing. Then the album falls down hard. Some good soloing from Ritchie and that's it. Pretty mediocre album overall.

Your feedback for Burn