Made In Japan (live album) by Deep Purple 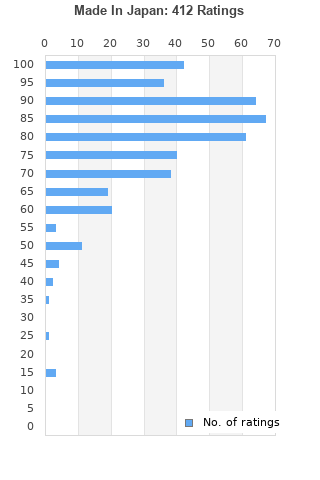 Made In Japan is ranked 3rd best out of 65 albums by Deep Purple on BestEverAlbums.com.

The best album by Deep Purple is Machine Head which is ranked number 239 in the list of all-time albums with a total rank score of 7,556. 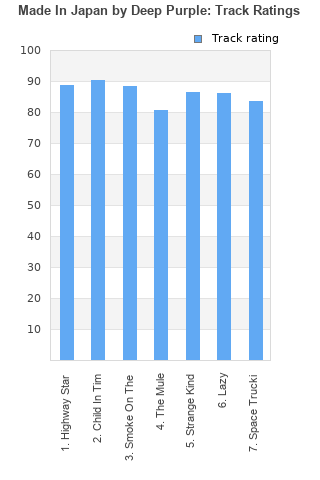 Made In Japan rankings

Made In Japan collection

Made In Japan ratings

Rating metrics: Outliers can be removed when calculating a mean average to dampen the effects of ratings outside the normal distribution. This figure is provided as the trimmed mean. A high standard deviation can be legitimate, but can sometimes indicate 'gaming' is occurring. Consider a simplified example* of an item receiving ratings of 100, 50, & 0. The mean average rating would be 50. However, ratings of 55, 50 & 45 could also result in the same average. The second average might be more trusted because there is more consensus around a particular rating (a lower deviation).
(*In practice, some albums can have several thousand ratings)
This album is rated in the top 1% of all albums on BestEverAlbums.com. This album has a Bayesian average rating of 80.8/100, a mean average of 80.3/100, and a trimmed mean (excluding outliers) of 81.0/100. The standard deviation for this album is 14.6.

Made In Japan favourites

Made In Japan comments

A fantastic live album that demonstrates exactly what a live recording should be like with it being filled with passion, energy and brilliant musicianship. Instrumentally, this release is extremely strong with every instrument providing incredible performances throughout the whole run time. The lead guitar is the stand out for me with it really driving the music forward with some electrifying solos. Ritchie Blackmore does a great job on this album of showing why he should be regarded as one of the greatest rock guitarists ever. The vocals are stellar as well with that wide ranging vocal never slowing down or allowing us to become tired of it. The song selection is pretty great as well with it being like a greatest hits performance for the band. There are 1 or 2 songs which do feel a bit slower and drag on a bit for me, such as The Mule, as they seem to be a bit more plain and don't hook me like all the other tracks. There is still plenty to keep you entertained on those tracks so you aren't taken out of the atmosphere of the album but they are definitely the weak part of the release. Overall, this is an album that shows what makes live albums great and that is capturing an artist at their peak and allowing their raw energy and musical quality to be able to be passed to us so we can experience it first hand and feel truly involved with the music.

A masterpiece and totally amazing live album from Deep Purple, released right after "Machine Head" (one of the greatest studio albums of the classic rock era) by the "Mark II" lineup of Ritchie Blackmore, Jon Lord, Ian Paice, Ian Gillan and Roger Glover. The extended live versions of Child In Time, Lazy, and Space Truckin' display the excellent musicianship of each important member. Killer good album!

It seems impossible to perfectly encapsulate a legendary band at their peak. Deep Purple managed to do that.

My earliest introduction to hard rock and I've never looked back. Fantastic musicianship and one of the best live albums ever released. A must in any rock/hard rock/metal connoisseurs collection. Outstanding

Possibly the greatest live album ever made. Worth owning the album for the incredible versions of Child In Time and Smoke On The Water, the latter with a slightly different guitar chord intro to the studio version. For a live album, the recording quality is superb. An album made to live on vinyl!

I picked this up at a used music store, it is the Remastered Edition and the show's encores (the last three songs) are featured on a second disc. Adds quite a bit to the package.

This is what I imagine to be the equivalent of multiple female orgasms. Very satisfying.

One of my all time favorites and the perfect showcase of how energetic Deep Purple was when it came to music.

Your feedback for Made In Japan