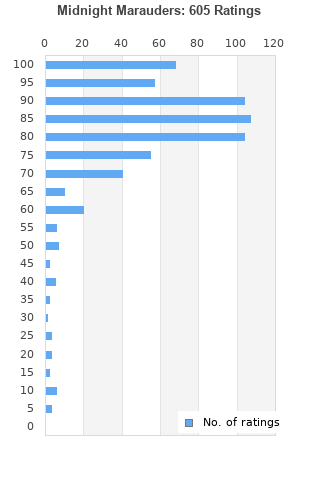 Midnight Marauders is ranked 2nd best out of 13 albums by A Tribe Called Quest on BestEverAlbums.com.

The best album by A Tribe Called Quest is The Low End Theory which is ranked number 149 in the list of all-time albums with a total rank score of 11,281.

...And You Will Know Us By the Trail of Dead
The Masquerade - Purgatory, Atlanta, United States. 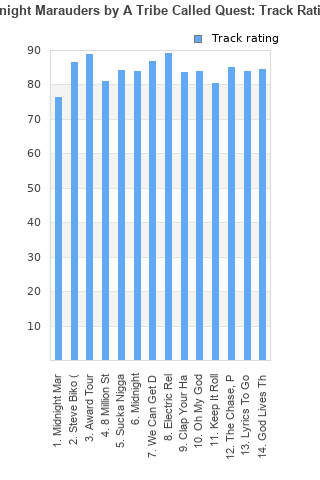 Rating metrics: Outliers can be removed when calculating a mean average to dampen the effects of ratings outside the normal distribution. This figure is provided as the trimmed mean. A high standard deviation can be legitimate, but can sometimes indicate 'gaming' is occurring. Consider a simplified example* of an item receiving ratings of 100, 50, & 0. The mean average rating would be 50. However, ratings of 55, 50 & 45 could also result in the same average. The second average might be more trusted because there is more consensus around a particular rating (a lower deviation).
(*In practice, some albums can have several thousand ratings)
This album is rated in the top 1% of all albums on BestEverAlbums.com. This album has a Bayesian average rating of 82.9/100, a mean average of 81.2/100, and a trimmed mean (excluding outliers) of 83.1/100. The standard deviation for this album is 16.6.

Hip Hop is ridiculously underrated on this site. Midnight Marauders is one of the best albums across all genres.

Such a great classic. Under rated on this website... like nearly every other hip hop album that's not by Kanye.

Stand out tracks:
Steve Biko (Stir it Up), Award Tour, Sucka Nigga, We Can Get Down, The Chase Part II, Electric Relaxation

My least favorite:
Oh My God and Keep It Rollin'

Now, it may come as a shock, but I have to confess this is one of those classics (actually there are alarmingly many albums that belong in this category, both in hip hop and in general) I appreciate more than I enjoy. If you ask me to name a negative attribute of this, I will most likely reply with some awkward silence and a helpless look. I mean, all of its elements are of the highest standard. Production-wise they go for a sound that feels like the natural evolution of their previous album. It is based on the same jazzy yet energetic background, but a bit more challenging, more daring, that's why it might not be as accessible during the first couple of listens, you need some repeats to properly evaluate it. The rapping is at least at the same level and arguably even a slight improvement in comparison to their previous album, Phife Dawg and Q-Tip seem to have found the perfect balance here. The lyrics combine socio-politcal commentary with captivating storytelling ("There's activities a-plenty in the nighttime For the ghetto child it seem to be the right time See, kids be getting stuck with jewels and fly gimmicks Shorty see the action and then start to mimic Running to the corner, the dice game is blazing Looking at the loot, it seems so amazing Puts the short down, to be exact one pound He shakes the stones in his hand, then he lets it down Scared money don't make none He threw a trip on the ace now he's out son Hits the local bodega to wolf down a hero Son is on a midnight run like De Niro"), some typical rap themes ("Musically, the three, poetically we be The enchantment on the airwaves, kids just fade Obey the MCs, cos the MCs say We flipping on niggas like we Super Dave ... Moving with the grace, here we go, let's begin Making people jump out their goddamn skin Lyrically, we bite like we Rin Tin Tin Peace to Grand Pu and his many many skins Don't mark us for the 'L' cos you know we get the wins It's the Ab, Shaheed, and the Dawg for the blend") and their trademark rhymes ("Told you in the jam that we can get down Now, let's knock the boots like the group H-Town You got BBD all on your bedroom wall But I'm above the rim and this is how I ball A gritty little something on the New York street This is how I represent over this here beat"). And to think they came up with this right after The Low End Theory, which at the time seemed like mission impossible to repeat or even come close to it, makes their achievement even more impressive.
To sum it up, it may not be among my biggest favorites, but it's status as an absolute classic is undeniable and well-deserved.

Not bad at all, but doesn't stand out the way Low End Theory does.

There are a few boring songs on here.

Oh ma gawd! For my money the best hip hop record ever. Hard as hell, smart and catchy.

A true classic. Every song is a banger.

How does a Tribe Called Quest follow up 1991's seminal 'The Low End Theory' ? With the remarkable 'Midnight Marauders' 2 years later

Definitely one of my big inspirations and one that sets me off down the path of jazz rap and East Coast glory!

Your feedback for Midnight Marauders