Songs Of Faith And Devotion (album) by Depeche Mode 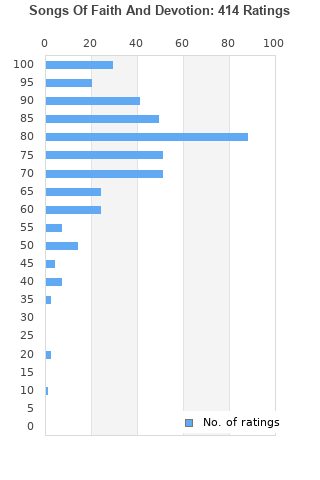 Songs Of Faith And Devotion
Condition: Good
Time left: 11h 25m 38s
Ships to: Worldwide
$4.74
Go to store
Product prices and availability are accurate as of the date indicated and are subject to change. Any price and availability information displayed on the linked website at the time of purchase will apply to the purchase of this product.  See full search results on eBay

Songs Of Faith And Devotion is ranked 4th best out of 40 albums by Depeche Mode on BestEverAlbums.com.

The best album by Depeche Mode is Violator which is ranked number 127 in the list of all-time albums with a total rank score of 13,761.

Listen to Songs Of Faith And Devotion on YouTube 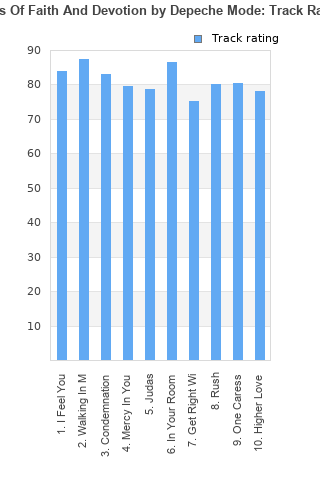 Songs Of Faith And Devotion rankings

Songs Of Faith And Devotion collection

Songs Of Faith And Devotion ratings

Rating metrics: Outliers can be removed when calculating a mean average to dampen the effects of ratings outside the normal distribution. This figure is provided as the trimmed mean. A high standard deviation can be legitimate, but can sometimes indicate 'gaming' is occurring. Consider a simplified example* of an item receiving ratings of 100, 50, & 0. The mean average rating would be 50. However, ratings of 55, 50 & 45 could also result in the same average. The second average might be more trusted because there is more consensus around a particular rating (a lower deviation).
(*In practice, some albums can have several thousand ratings)
This album is rated in the top 6% of all albums on BestEverAlbums.com. This album has a mean average rating of 77.0/100. The trimmed mean (excluding outliers) is 76.9/100. The standard deviation for this album is 14.6.

Songs Of Faith And Devotion favourites

Songs Of Faith And Devotion comments

This and Violator are Depeche Mode best albums.

So soulsoothing
My second favorite álbum

Songs of faith and devotion marks the the final album in Depeche mode's golden era. This album has the most rock influenced sound in their career.

Favoritas: Walking In My Shoes, One Caress, I Feel You, Condemnation

The follow up to, violator, songs of faith and devotion, is another excellent Depeche Mode album. Kicking off with the magnificent, I feel you, it sees the band embracing rock more than ever before. Other highlights include, walking in my shoes, in your room, and the soul ballad, condemnation. It slightly runs out of steam towards the end, but it's a small quibble. The late eighties/early nineties was Depeche Mode's imperial phase and this album, along with, music for the masses, and violator, are their best records.

IDK... feel like this had a lot of hit and miss stuff on it. I feel like they were trying new ideas that didn't quite work (vocal style didn't match a more modern/almost hip-hop beats). That's my opinion of course. You are entitled to yours.

I think this is their fourth best, yet still a classic.

Though it's not Violator by any means, it's a damn good album with great songs! Very interesting how the Mode branched out to natural instruments and took influences from other genres

Almost as good as Violator, but not quite as gripping.

Violator might be their best, but this one's my personal favorite. I Feel You and In Your Room are my favorites.

Your feedback for Songs Of Faith And Devotion