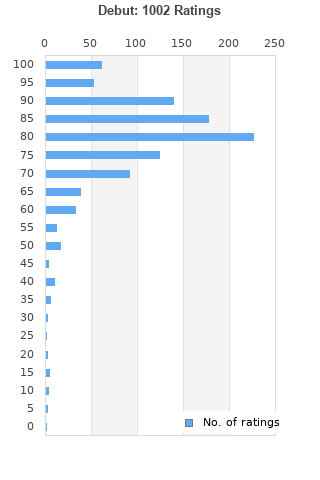 Debut is ranked 4th best out of 23 albums by Björk on BestEverAlbums.com.

The best album by Björk is Homogenic which is ranked number 95 in the list of all-time albums with a total rank score of 15,290. 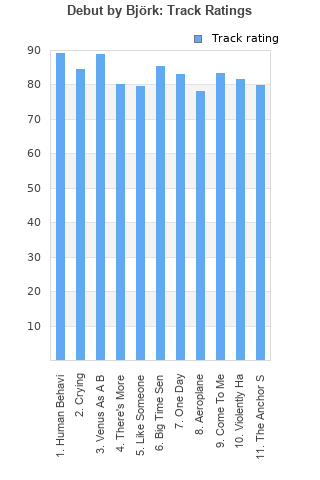 Rating metrics: Outliers can be removed when calculating a mean average to dampen the effects of ratings outside the normal distribution. This figure is provided as the trimmed mean. A high standard deviation can be legitimate, but can sometimes indicate 'gaming' is occurring. Consider a simplified example* of an item receiving ratings of 100, 50, & 0. The mean average rating would be 50. However, ratings of 55, 50 & 45 could also result in the same average. The second average might be more trusted because there is more consensus around a particular rating (a lower deviation).
(*In practice, some albums can have several thousand ratings)
This album is rated in the top 2% of all albums on BestEverAlbums.com. This album has a Bayesian average rating of 80.1/100, a mean average of 79.0/100, and a trimmed mean (excluding outliers) of 80.2/100. The standard deviation for this album is 14.4.

This album is one of the great debut albums of all time. Experimental, beautiful and clever, it is laden with carefully placed beats and top quality songwriting. There are some breathtaking moments here - There's More To Life Than This, Big Time Sensuality, Come To Me - and one is left wanting more music when the tracks finish. A stunning LP.

An original and fine debut album. Play dead as an additional track on one version finishes this off nicely

Björk's debut, aptly titled Debut, is incredibly produced and executed. Her voice is great and she is not afraid to flaunt it. The only thing I think this albums suffers from is lack of cohesion. Lots of interesting ideas in every song (trip hop, world, electronica, house, jazz), but they never seem to connect fully. But Debut's shortcomings are far outweighed by its strengths.

Freaking magical! Unique and fun as hell pop album. Bjork is a genius.

a stunning introduction to Bjork containing some well-known classics - later albums and songs are more celebrated and rightly so, but this holds a special place in the heart

Your feedback for Debut