So Tonight That I Might See (studio album) by Mazzy Star 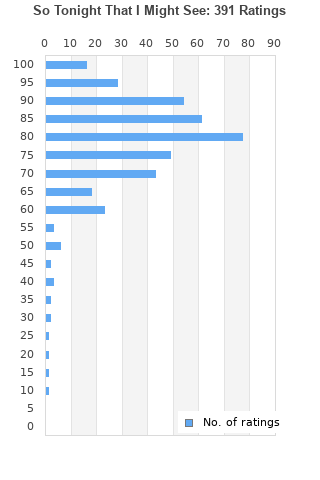 So Tonight That I Might See - Audio CD By Mazzy Star - VERY GOOD
Condition: Very Good
$5.00

MAZZY STAR - SO TONIGHT THAT I MIGHT SEE NEW CD
Condition: Brand New
$11.70

MAZZY STAR SO TONIGHT THAT I MIGHT SEE NEW VINYL
Condition: New
$29.99

So Tonight That I Might See is ranked as the best album by Mazzy Star. 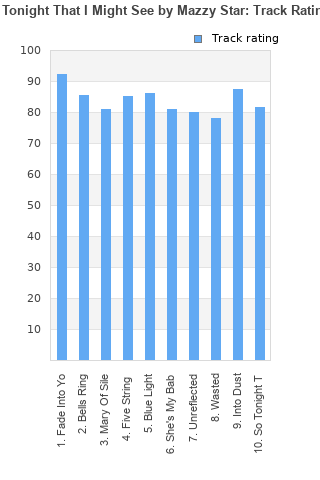 Rating metrics: Outliers can be removed when calculating a mean average to dampen the effects of ratings outside the normal distribution. This figure is provided as the trimmed mean. A high standard deviation can be legitimate, but can sometimes indicate 'gaming' is occurring. Consider a simplified example* of an item receiving ratings of 100, 50, & 0. The mean average rating would be 50. However, ratings of 55, 50 & 45 could also result in the same average. The second average might be more trusted because there is more consensus around a particular rating (a lower deviation).
(*In practice, some albums can have several thousand ratings)
This album is rated in the top 2% of all albums on BestEverAlbums.com. This album has a Bayesian average rating of 79.3/100, a mean average of 78.5/100, and a trimmed mean (excluding outliers) of 79.5/100. The standard deviation for this album is 13.9.

This album is a bit of a mess in my opinion. It opens with what is the strongest cut on the whole record and then struggles to maintain that pace from there. Most of the tracks after that are filler and all feel pretty empty and like they are missing a persona. The music isn't very complex and doesn't give us very much to explore or keep coming back to. It feels empty and boring and I really struggled to maintain my concentration on the music. I just see no reason to come back to this record over and over again. Maybe if I didn't listen to the quality of the first track then the rest of the music wouldn't be as disappointing as it is. The singing is fantastic though and gives the album a little bit of uniqueness that stops it from being completely dull. Overall, I just can't seem to get into this album and don't think there is much quality here in my opinion.

I love Hope Sandoval's voice, but as a whole this album was a bit underwhelming. Fade Into You and Five String Serenade are great. Not much else to shout about though sadly.

Pretty good. Nothing absolutely fantastic. Maybe this is one of those albums you have to listen to multiple times to really "get it". Five String Serenade and Fade Into You are great, the rest are fine.

I couldn't place my finger on it until I saw garycottier's comment; its very similar to the Velvet Underground. A very interesting album overall, I will have to listen again

Nice laid back album with hints of darkness underneath. Reminiscent of the Velvet Underground at times with a sprinkling of the blues , it's the perfect late night, lights out album to chill out to. Dark Americana.

Kendra Smith hurled her guitar to the stage. She had had it. The constant, tedious grind of touring. Being worshipped by strangers. All of it. It was too much. She didn’t want it anymore. “Fuck this mousetrap”, she mumbled to herself. ”I’m going to live off the grid.” And you know what? She did!

And that was probably the best thing that ever happened to David Roback’s already fairly stellar career. Because he had already found “HER” - discovered her through a friend of a friend playing on a demo tape as part of some unheard of local folk duo that still no one’s heard of (Going Home if you’re really curious. But, they never even released an album! I mean it’s the indie rock equivalent of American Idol). The youngest of 60 some odd siblings, Hope was a pint sized, exotic Mexican beauty with pouty lips to die for. Let’s put it this way. Jimmy Reid - & I know you're reading this, brother - You’re a lucky, lucky man!

Quite simply, Hope Sandoval was born to be a rock star. She just had that indefinable IT. And her timing entering the scene was pitch perfect. She was the perfect diva for early 90s grunge. Part of her charm was she really, truly didn’t give a shit. It wasn't some calculated move. She really, truly didn’t give a shit. And she came to epitomize the “it” fashion statement of the day. The fashion look that had the prepubescent, waif looks of the Kate Moss & Jamie King staring down at us from like a hundred million billboards. Heroin chic they called it. And the singing of Hope Sandoval and music of Mazzy Star was its soundtrack. Because Hope sang Rip Van Winkle style - a lazy, laconic cotton mouth drawl as if as if each note was going to be her last before falling a slumber for a hundred years or more. A true sleeping beauty if there ever was one.

I can see why Albummaster recommended this to me when I volunteered that I’m a sucker for laconic & hazy albums. (Considering I’m a born manic monkey, a laconic lion is what I strive to be).

At any rate she was the missing ingredient. Don’t get me wrong. Opal were good. Damn good. (especially check out their earliest recordings compiled on, you got it it - [i]Early recordings[/i].) And Kendra Smith had one more beguiling solo album in her - the aptly titled[i] Five Ways of Disappearing[/i] - before blithely disappearing into the California woods to organic farm on her country cabin with nothing but her music and her cats. (Yo! Kendra! If you ever want company… well, you know who to call! :wink: )

And [i]So Tonight That I May See[/i] (rightly) became THE album of the Heroin Chic scene.

And just as impressive as the sound they perfected on this album is the sheer scope of it. No two songs sound the same. It was as if Robach was determined to make THE grunge palette on these ten songs. Whether it be Hope channeling her inner Kirsten Hersch on “Into Dust” (my personal fave among an album full of them) or the duo going primal & full on Pub Rock on the positively AC/DCian Wasted.

Grade: A. It’s no coincidence that Mazzy Star and Julee Cruise were recommended to me within hours of each other. Just as I was to start binging on Twin Peaks (yet again) to get ready for season 3. Because both are the perfect Lynchian artists. Both would be the perfect band to catch at The Roadhouse on some Saturday night. And [i]So Tonight That I May See[/i] was the epitome of heroin chic. Alice’s In Chain’s Dirt comes damn close, but this is easily the best. Channeling The Velvet Underground’s debut and The Door’s psychedelic lazy debauchery into the grunge aesthetic. No other album quite competes. And make no mistake about it. This is grunge. Classic grunge. One of the essential grunge albums that solidified the scene while expanding its palette as far back as Mazzy Star’s debut [i]She Hangs Brightly[/i] with its feedback laced guitars. Music that fell into itself. Imploding as opposed to exploding. And this album laconically drawls it way oh so sleepily to number 25.

The memory of that moment is infinitely implanted, but with every day it fades.

Your feedback for So Tonight That I Might See