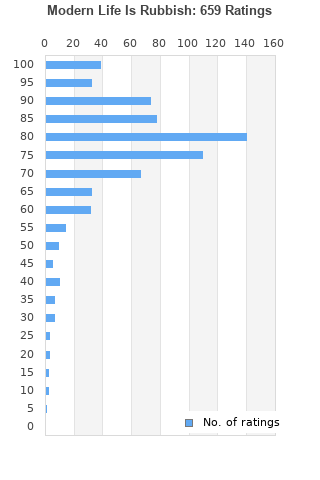 Blur Modern Life Is Rubbish PROMO Canvas Print** RARE**
Condition: Like New
Time left: 21h 41m 5s
Ships to: Worldwide
£30.00
Go to store
Product prices and availability are accurate as of the date indicated and are subject to change. Any price and availability information displayed on the linked website at the time of purchase will apply to the purchase of this product.  See full search results on eBay

Modern Life Is Rubbish is ranked 4th best out of 21 albums by Blur on BestEverAlbums.com.

The best album by Blur is Parklife which is ranked number 203 in the list of all-time albums with a total rank score of 9,251. 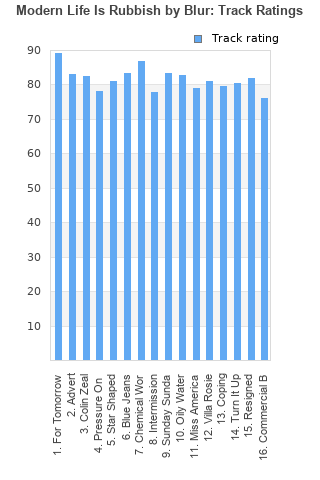 Rating metrics: Outliers can be removed when calculating a mean average to dampen the effects of ratings outside the normal distribution. This figure is provided as the trimmed mean. A high standard deviation can be legitimate, but can sometimes indicate 'gaming' is occurring. Consider a simplified example* of an item receiving ratings of 100, 50, & 0. The mean average rating would be 50. However, ratings of 55, 50 & 45 could also result in the same average. The second average might be more trusted because there is more consensus around a particular rating (a lower deviation).
(*In practice, some albums can have several thousand ratings)
This album is rated in the top 4% of all albums on BestEverAlbums.com. This album has a Bayesian average rating of 77.3/100, a mean average of 76.4/100, and a trimmed mean (excluding outliers) of 77.4/100. The standard deviation for this album is 15.6.

Such an improvement from Leisure, for sure, their influences are obvious, maybe a little too obvious but it's a fun ride from start to finish

Not quite the finished article, but an absolutely delightful work to listen to that showed the band's promise

Catchy and lyrically stellar, but the songs (especially Albarn's singing) get irritating after a while.

Definitely needs more listens, but at first I will say it is more irregular than their first effort, though still a really good album. 8/10.

Not a bad record, but it gets a bit weaker after the first half

Some solid tunes not as good as 13

Entertaining, consistently good. Take away the two extras at the end of tracks 7 and 15 and there's not too much wrong with this.

Probably the best album by Blur. Extremly intriguing songwriting and a consistent, interesting sound. Intermission sounds crazy and Chemical World is one of the best songs by Blur.

A brilliant album. Modern life is rubbish, could be looked upon as a first in a trilogy, but whether It is or not, doesn't really matter, it's a great record. Great songs in, advert, pressure on julian(which sounds just like Adam Ant to me), and, starshaped. I do think, leisure, is underrated, but, MLIR, is Blur's first essential record.

Your feedback for Modern Life Is Rubbish