Rid Of Me (studio album) by PJ Harvey 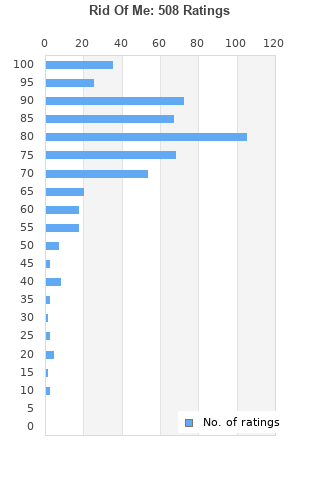 Rid Of Me is ranked 4th best out of 20 albums by PJ Harvey on BestEverAlbums.com.

The best album by PJ Harvey is Let England Shake which is ranked number 302 in the list of all-time albums with a total rank score of 6,295. 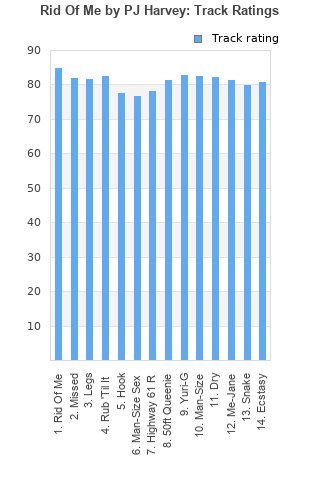 Rid Of Me rankings

Rid Of Me collection

Rid Of Me ratings

Rating metrics: Outliers can be removed when calculating a mean average to dampen the effects of ratings outside the normal distribution. This figure is provided as the trimmed mean. A high standard deviation can be legitimate, but can sometimes indicate 'gaming' is occurring. Consider a simplified example* of an item receiving ratings of 100, 50, & 0. The mean average rating would be 50. However, ratings of 55, 50 & 45 could also result in the same average. The second average might be more trusted because there is more consensus around a particular rating (a lower deviation).
(*In practice, some albums can have several thousand ratings)
This album is rated in the top 2% of all albums on BestEverAlbums.com. This album has a Bayesian average rating of 78.9/100, a mean average of 77.8/100, and a trimmed mean (excluding outliers) of 79.0/100. The standard deviation for this album is 15.5.

Rid Of Me favourites

Rid Of Me comments

This record really highlights all of PJ Harvey's strengths perfectly and that creates a fantastic alternative rock album. Her voice sounds so raw and passionate and this release is possibly the best vocal performance she has given. It is so diverse as well and matches the music brilliantly. The production really helps this by also matching to her voice and to the themes of the lyrics to make a cohesive album that flows really well right from the start. The lyrics are amazing as well and provide another edge to the record which is best shown on Rub 'Til It Bleeds which is the standout track from this album. There are a few songs which are a little weaker than the rest and there is an argument they could be cut. Overall, an album that demonstrates just how good PJ Harvey was right from the start and it might be a little under rated in the grand scheme of her discography.

This album is a hidden gem that not many people know about. I have owned this album 18 years and one of the few in my collection I always look forward to listening to without fear of playing it out.

I get the feeling she is influenced some by Patti Smith, who has best ever albums herself, classics. I also hear a little Danzig in her voice. I only realized after listening after first hearing Danzig's voice. So I didn't catch that before.

I get the same vibe of Patti Smith from PJ Harvey. Either way, I'm just always astounded at this original work. Underrated, but it doesn't matter. It exists and is there for people to listen to if they want to.

Similar to planetneutral, I can appreciate the originality and raw production but I doubt I will ever put this CD on again. Best track, Rub Till it Bleeds.

I can appreciate this without actually wanting to listen to it again.

P.J Harvey's second album is just as raw and uncompromising as her first. Rid of me, is an angry, sexy, and powerful record and Harvey is on top form throughout. Great songs from the pen of PJ and even a cover of Bob Dylan's, highway 61 revisited. Strong stuff.

I have a love-hate relationship with Steve Albini. I love some of the albums he produced - In Utero, Attack On Memory, Magnolia Electric Co - and cannot stand others. This is one of the latter. Other people call it raw but I call it one-dimensional and compressed. Plus I've never loved Harvey's voice and that combined with the tinny production makes this unenjoyable.

Lyrical themes are great and would contribute to a great album if the production was better. Though the Bob Dylan cover feels ridiculously out of place.

Your feedback for Rid Of Me