August And Everything After (studio album) by Counting Crows

August And Everything After by Counting Crows
Year: 1993
Overall rank: 617th 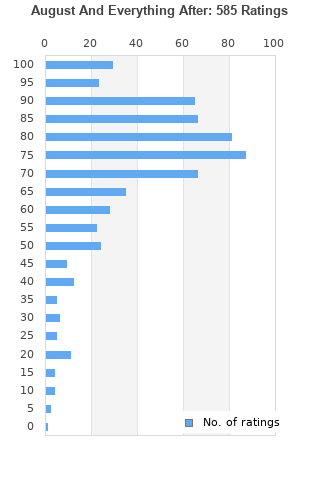 Counting Crows August And Everything After CD 1993 (a2)
Condition: Very Good
Time left: 4h 42m 11s
Ships to: Worldwide
$12.99
Go to store
Product prices and availability are accurate as of the date indicated and are subject to change. Any price and availability information displayed on the linked website at the time of purchase will apply to the purchase of this product.  See full search results on eBay

August And Everything After is ranked as the best album by Counting Crows. 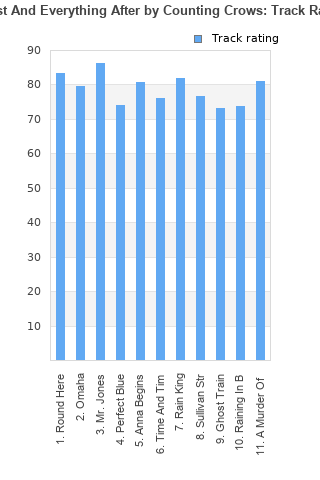 August And Everything After rankings

August And Everything After collection

August And Everything After ratings

Rating metrics: Outliers can be removed when calculating a mean average to dampen the effects of ratings outside the normal distribution. This figure is provided as the trimmed mean. A high standard deviation can be legitimate, but can sometimes indicate 'gaming' is occurring. Consider a simplified example* of an item receiving ratings of 100, 50, & 0. The mean average rating would be 50. However, ratings of 55, 50 & 45 could also result in the same average. The second average might be more trusted because there is more consensus around a particular rating (a lower deviation).
(*In practice, some albums can have several thousand ratings)
This album has a Bayesian average rating of 73.3/100, a mean average of 72.3/100, and a trimmed mean (excluding outliers) of 73.3/100. The standard deviation for this album is 19.3.

August And Everything After favourites

August And Everything After comments

Give it a higher rating than I usually would to compensate for the people giving this album more shit than it deserves, it's really solid and doesn't deserve a 73/100 score.

T. Bone Burnett produced this stupendous debut from Counting Crows. This alternative rock record effortlessly crosses over into the genres of Americana, folk, heartland rock and folk-rock. The songwriting is thoughtful and intimate. The sound is clean and polished, despite being a very organically produced record.

Don't judge this album by what C.C's became , judge it for what it is - one of the best albums from the 1990's

Wow, the marmite of albums judging by the comments. I actually liked this album and like this album now. My favourites are Round Here and Anna Begins. Yes it is all a bit overly sentimental but that doesn’t change the fact it is a good album. Enjoy!

Great album, I don't understand why it gets flak.

Adam Duritz and is stream-of-consciousness-lyrics! Counting Crows are most known for this album and at the time time it sounded so unique and different than other bands.

Later, with each subsequent release we come to find that this is really all the Crow's can do. And Duritz's sad sap, me against the world and women schtick gets harder and harder to listen to as he gets older and no wiser.

But August and Everything After is excellent.

Round Here is one of my all time favorite songs and a stellar opener flexing the lyrical muscle of Duritz with lines such as "step outside the front door like a ghost into a fog where no one notices the contrast of white on white". Excellent.

Anna Begins is the next standout. Omaha, Mr Jones, Rain King, Murder Of one, Sullivan Street are all excellent.

A classic release in the 90's and now with some time added on it is still excellent but not a masterpiece.

Adams Duritzs choice of lyrics and melody stand out on this record.

This is the album I think most of the teenagers in the 90's had in their houses, or that's my thought, but it sounds bland sometimes. If thi album lasted only 40 minutes or so it would be greater, ohhh the lyrics

I'll admit that I like Mr. Jones, although it might just be because of nostalgia and the fact that whats-his-name's voice harkens back to a very specific period in music. The rest is pretty worthless though - unexcited, unadventurous 90s rock filled with clichés and phrases that sound meaningful but are really just pandering to people who think namedropping Elvis and Jesus makes a song good.

Your feedback for August And Everything After