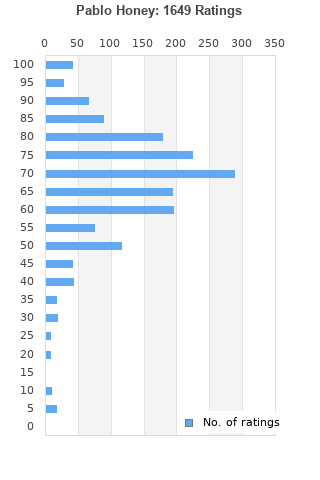 Pablo Honey is ranked 9th best out of 22 albums by Radiohead on BestEverAlbums.com.

The best album by Radiohead is OK Computer which is ranked number 1 in the list of all-time albums with a total rank score of 92,566. 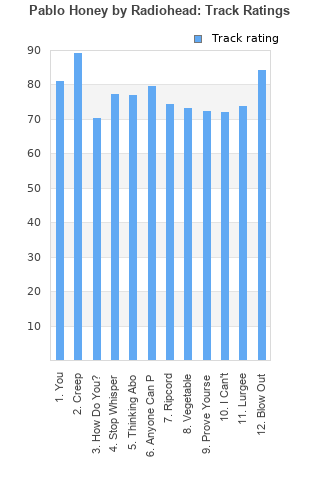 Rating metrics: Outliers can be removed when calculating a mean average to dampen the effects of ratings outside the normal distribution. This figure is provided as the trimmed mean. A high standard deviation can be legitimate, but can sometimes indicate 'gaming' is occurring. Consider a simplified example* of an item receiving ratings of 100, 50, & 0. The mean average rating would be 50. However, ratings of 55, 50 & 45 could also result in the same average. The second average might be more trusted because there is more consensus around a particular rating (a lower deviation).
(*In practice, some albums can have several thousand ratings)
This album has a Bayesian average rating of 68.0/100, a mean average of 67.0/100, and a trimmed mean (excluding outliers) of 68.0/100. The standard deviation for this album is 16.5.

Originally, this was my least favourite Radiohead album, but it has really grown on me. It's a bit of a different sound to all their others, but definitely it is closest to The Bends. Stop Whispering is the best track on the album, and is my favourite Radiohead song. Blow Out is also excellent, along with of course Creep (although it has been overplayed so I'm a bit numb to it now). Other than those it is a very solid album.

1. The part where a low score * high vote count = still high ranking is kinda hilarious.
2. In the Radiohead scheme of things, this album gets a colossal amount of flack.

On its own, it would be nitpicking to still say Pablo Honey is mediocre. It doesn't do anything wrong. If I wanted a solid and rocky Radiohead album, I could pick between this, The Bends, and (if I want superb refinement) In Rainbows.

a mediocre debut from an extraordinary group.

If it were released by another band, it would be ok, but the comparison with what came next pretty much kills it.

For those saying give this album more tries, be assured that doesn't work for everyone. I tried it several more times and I just find it noisy and irritating. It's the only Radiohead album I don't love.

Is it their weakest album ? Yes. Is it a basic alternative rock record ? Yes. Does it have bad songs ? Yes. Is it just total garbage ? Hell no ! Before you give this album a 30/100, give it 2-3 more listens. Consider it's their debut album. Radiohead worst album doesn't mean it's actually a really bad album. Strong opener and closer.

Standout tracks: You, Creep, Blow Out

Radiohead is one of top 2 favorite bands, but that love certainly doesn't stem from this album. Easily the weakest Radiohead album. Creep is really good though.

Your feedback for Pablo Honey