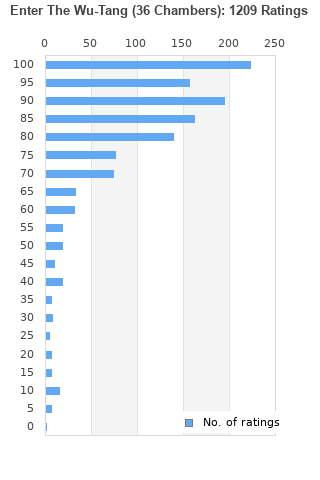 Wu-Tang Clan ~ Enter the Wu-Tang 36 Chambers +Bonus Track ~ NEW CD Shaolin Sword
Condition: Brand New
Time left: 1d 14h 2m 36s
Ships to: Worldwide
£6.85
Go to store
Product prices and availability are accurate as of the date indicated and are subject to change. Any price and availability information displayed on the linked website at the time of purchase will apply to the purchase of this product.  See full search results on eBay

Enter The Wu-Tang (36 Chambers) is ranked as the best album by Wu-Tang Clan. 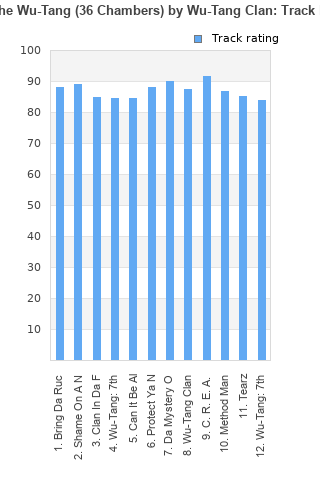 Rating metrics: Outliers can be removed when calculating a mean average to dampen the effects of ratings outside the normal distribution. This figure is provided as the trimmed mean. A high standard deviation can be legitimate, but can sometimes indicate 'gaming' is occurring. Consider a simplified example* of an item receiving ratings of 100, 50, & 0. The mean average rating would be 50. However, ratings of 55, 50 & 45 could also result in the same average. The second average might be more trusted because there is more consensus around a particular rating (a lower deviation).
(*In practice, some albums can have several thousand ratings)
This album is rated in the top 1% of all albums on BestEverAlbums.com. This album has a mean average rating of 82.0/100. The trimmed mean (excluding outliers) is 83.9/100. The standard deviation for this album is 19.6.

Whoever "corrected" this album's tracklist has made a mistake and is using a discogs page that is also incorrect as proof. The tracklist from before was correct and this should be put back as soon as possible. Anyways this album is one of the best of the 90s and of all time simply through the amount of different personality and energy every MC brings to the table and how there are so many awesome quotables. The beats are impressive as well in their minimalist but not understated ways, that make you bob your head through every track and allow to still keep the listener focus on what's important, the amazing rapping. A true gem in hip hop that's for sure, and an untouchable classic.

Wu-Tang Clan is my favorite hip-hop crew. The crew is composed of the best rappers in the universe: RZA "The Scientist", GZA "The Genius", Ol 'Dirty Bastard "The Specialist", Raekwon, Inspectah Deck, Method Man, U-God, Masta Killa and the great , the god of hip-hop: Ghosteface Killah. "Enter The Wu-Tang" is one of the hottest album I have ever heard. It's never heard, brothel! The world of rap It is fucked in a hardcore gangbang by 9 members of Wu-Tang. The atmosphere is sticky, roomy and dark. The productions of RZA are excellent, mixed and sampled to perfection, the beats are serious and marshy. This album is the greatest classic of modern hip-hop and RZA and its accolythes are the greatest god of rap and music in general...

The record that made me love hip hop. This album is like concrete : dirty & hard.

Only the Clan could do this. Disclaimer: I am a big fan of East Coast beats. This masterpiece of an album doesn't need anything like that to prove that it's spiffin. You go from very real feeling, simple tracks from Can It Be So Simple to full on characterful, up in your face of Bring Da Ruckus and Shame on a Nigga. It takes you through the life and times of people exploring their world, their history and making relationships with each other. Each member is distinct and talented. Amazing sampling, great instrumentals, with variety from simple beats to complicated nuanced verse delivery, this album packs a serious punch. PS: Method Man is actually one of my faves, apart from C.R.E.A.M. ofc

More of a muse than an album, and one that paints a detailed, dark and deepening picture of life in inner-city New York. There isn't a single weak track on Enter The Wu-Tang, and the consistency of both it's theming and the music itself easily make it one of the all time greatest concept albums.

The production delivers this rough-and-ready yet home grown feel to every song, with an almost minimalist approach to using samples and beats. The result though is that it ends up with a subtle power that is dexterous enough to delivers proper bangers like Bring Da Ruckus and Method Man, as well as stunning, almost philosophical tracks like the legendary C.R.E.A.M.

The aggressive coolness and awesome samples make this one of the quintessential hardcore hip hop records, and undoubtedly one of the strongest, most consistent and most rewarding records the genre has ever produced. Incredibly strong from start to finish and packed to the brim with its firm, dark perspective of New York, it's an absolute essential for any record collection.

Hasn't really aged well, but that's to be expected with a hip-hop record from 1993. Regardless, really fun album introducing the most iconic hip-hop group of all time.

Wu-tang hits you a roundhouse of hip-hop, but the beats don't always keep up with the clan.

Your feedback for Enter The Wu-Tang (36 Chambers)