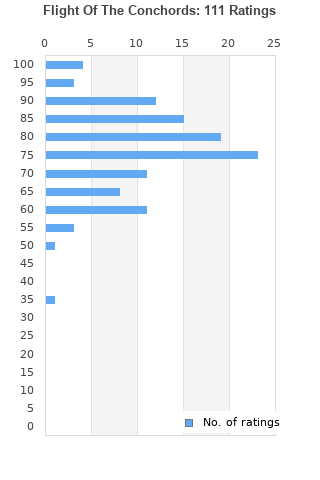 Flight of the Conchords Live In London Loser Edition and I Told You I Was Freaky
Condition: New
Time left: 1h 32m 5s
Ships to: Worldwide
$69.99
Go to store

The Distant Future, Flight Of The Conchords, Good EP
Condition: Good
Time left: 15h 21m 59s
Ships to: Worldwide
$6.99
Go to store
Product prices and availability are accurate as of the date indicated and are subject to change. Any price and availability information displayed on the linked website at the time of purchase will apply to the purchase of this product.  See full search results on eBay

Flight Of The Conchords bestography

Tickets from Ticketmaster Get tickets
May
07
Fri
19:00 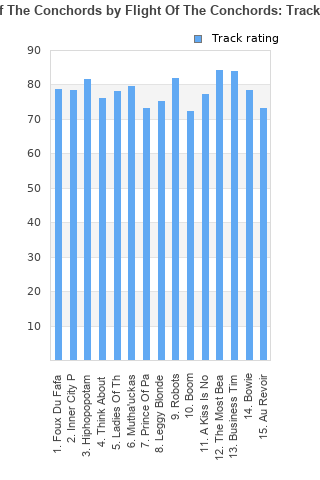 Flight Of The Conchords rankings

Flight Of The Conchords collection

Flight Of The Conchords ratings

Rating metrics: Outliers can be removed when calculating a mean average to dampen the effects of ratings outside the normal distribution. This figure is provided as the trimmed mean. A high standard deviation can be legitimate, but can sometimes indicate 'gaming' is occurring. Consider a simplified example* of an item receiving ratings of 100, 50, & 0. The mean average rating would be 50. However, ratings of 55, 50 & 45 could also result in the same average. The second average might be more trusted because there is more consensus around a particular rating (a lower deviation).
(*In practice, some albums can have several thousand ratings)
This album is rated in the top 4% of all albums on BestEverAlbums.com. This album has a Bayesian average rating of 77.3/100, a mean average of 77.3/100, and a trimmed mean (excluding outliers) of 77.7/100. The standard deviation for this album is 11.3.

Flight Of The Conchords favourites

Flight Of The Conchords comments

Well crafted and hilarious, the Concords put New Zealand on the map with dry humor and a variety of musical styles.

These guys are hilarious. These songs are really well crafted. Some of the songs don't translate as well if you haven't seen the show.

I've been listening to this album an awful lot lately and it reminds me how much I miss this show. The lyrics are brilliant and the music never fails to make me happy. The only reason I give it a 70/100 here is because both their live performances and even their tv show performances translate better than what actually made it onto this album.

Downright funny and fun to listen to.

Not only are the songs brilliantly funny, but also fantastic tunes - and can be enjoyed just as songs!

Your feedback for Flight Of The Conchords