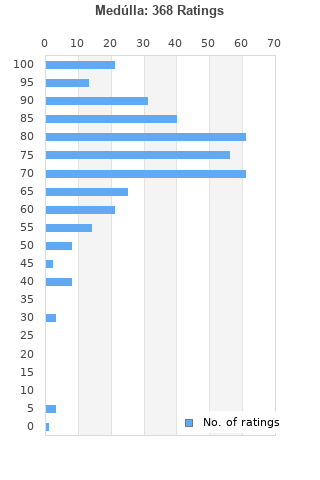 Medúlla is ranked 6th best out of 23 albums by Björk on BestEverAlbums.com.

The best album by Björk is Homogenic which is ranked number 115 in the list of all-time albums with a total rank score of 15,088. 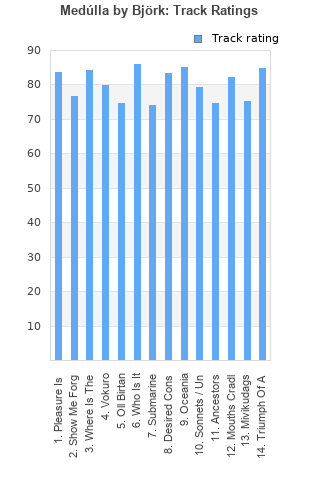 Outliers can be removed when calculating a mean average to dampen the effects of ratings outside the normal distribution. This figure is provided as the trimmed mean. A high standard deviation can be legitimate, but can sometimes indicate 'gaming' is occurring. Consider a simplified example* of an item receiving ratings of 100, 50, & 0. The mean average rating would be 50. However, ratings of 55, 50 & 45 could also result in the same average. The second average might be more trusted because there is more consensus around a particular rating (a lower deviation).
(*In practice, some albums can have several thousand ratings)
This album is rated in the top 17% of albums on BestEverAlbums.com. This album has a mean average rating of 74.0/100. The trimmed mean (excluding outliers) is 75.1/100. The standard deviation for this album is 15.9.

Unlike anything I have ever heard

The best record of all time.

Besides "Mouths Cradle", and "Triumph Of A Heart", there aren't much interesting moments.

Wait a minute, I actually never gave a response for this record. But to make this short and sweet, not only is this my favorite Bjork record. It is also in my top 5 for the 2000's. Such an amazing record.

Actually love this album, her vocals in this are amazing, and I like it more when she sings in Icelandic

Basically an acapella album. Medulla, is predominately all made by the human voice. You cannot deny the artistic courage in making a record like this but unfortunately the finished product doesn't quite add up to it's promise. Most of it is forgettable, only on, who is it, does Bjork fashion a strong melody, still, repeated listens do eventually bring out the songs, but they're still not up their with her best. It's not a bad record, it's Bjork for god's sake, but this time I don't think she quite hit the mark. If the album had been recorded with musical instruments it might have been a fuller record, still you have to applaud her ambition.

If you were to ask a Björk fan what their favourite album of hers is, I doubt many would say Medúlla, but for me this is definitely my favourite and also the best album I've ever had the privilege of listening to.
The greatest records take you on a journey, and this is precisely what Medúlla does for me. Each time I listen to it, it takes me to another world simultaneously thousands of years in the past and the future. Mostly an acapella album, Björk's vocals feel completely alive and the production is filled with voices (some haunting, some ethereal) and this only adds to the primal and timeless feel of it all.
I'm not saying Medúlla is a perfect album (as with every album, there are stronger and weaker tracks) but there's something so raw and powerful about it, even more so than the rest of her albums (which are all powerful), that I just can't stop admiring it.
A complete masterpiece.

when i was little my sister loved björk and she had her on repeat everyday so when i listen to post or medulla now i feel like i'm connecting with those memories from my childhood.

it's obvious that for every björk fan or just music fan this is a really complicated album to like, i mean, what is ancestors?!! but in the end this is a great piece with no weak point. it shows björk's arrengement, lyrical and production skills, and, if you take that one moment to the side, you can see an honest and beautiful album.

i feel like there's something watching over me when i listen to this, it's really haunting.

best songs are who is it (when it drops it feels like you're in a dark place full of goo), where is the line, desired constellation, öll birtan and pleasure is all mine 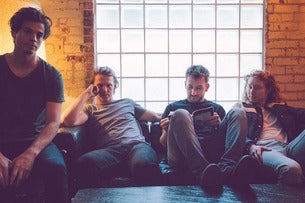 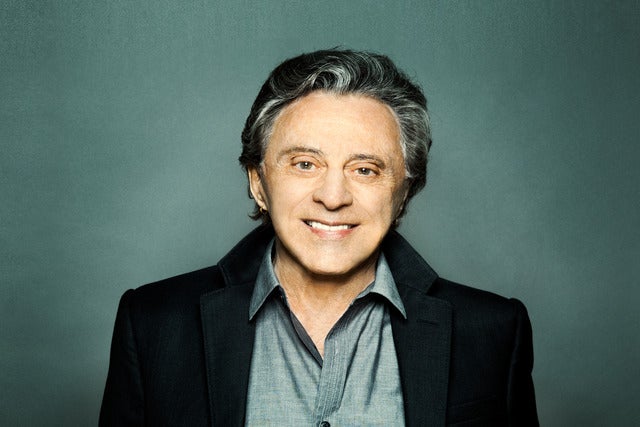