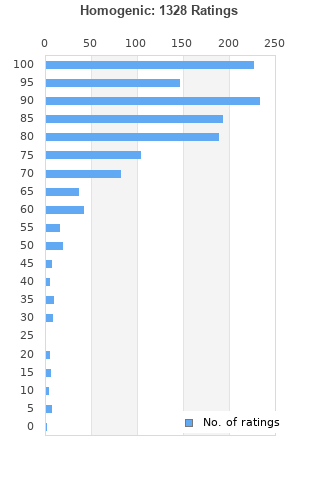 Bjork: Homogenic =Cassette=
Condition: Brand New
Time left: 16h 11m 19s
Ships to: Worldwide
£13.09
Go to store
Product prices and availability are accurate as of the date indicated and are subject to change. Any price and availability information displayed on the linked website at the time of purchase will apply to the purchase of this product.  See full search results on eBay

Homogenic is ranked as the best album by Björk. 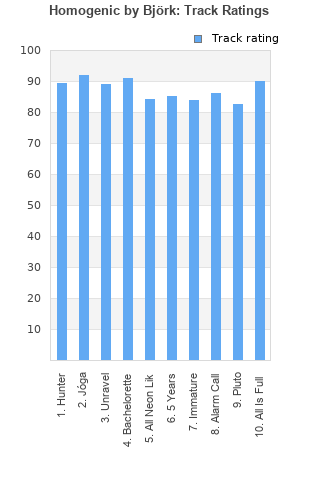 Rating metrics: Outliers can be removed when calculating a mean average to dampen the effects of ratings outside the normal distribution. This figure is provided as the trimmed mean. A high standard deviation can be legitimate, but can sometimes indicate 'gaming' is occurring. Consider a simplified example* of an item receiving ratings of 100, 50, & 0. The mean average rating would be 50. However, ratings of 55, 50 & 45 could also result in the same average. The second average might be more trusted because there is more consensus around a particular rating (a lower deviation).
(*In practice, some albums can have several thousand ratings)
This album is rated in the top 1% of all albums on BestEverAlbums.com. This album has a Bayesian average rating of 84.4/100, a mean average of 83.0/100, and a trimmed mean (excluding outliers) of 84.4/100. The standard deviation for this album is 16.2.

I can appreciate it, but its not for me

I find Björk more challenging than I prefer my music to be. This is not her most challenging work.

Björk's most dense and gratifying release of the 90s, Homogenic also places the final missing puzzle piece from her first two albums in its place: cohesion. Homogenic is incredibly focused and executed. This album is a pinnacle in art pop.

Bjork's best album. Bachelorette! Wow. What a masterpiece. It should have been used in a James Bond film as it's absolutely epic.

I liked this album while I was in high school, but in those years Björk was more of a thing that my brother liked and I heard while I was doing something else. Then I saw Hunter's video and realized how complex was the artistry of Björk, pushing not only in her sound but in her visual concept.

Then Medulla came out and I was impressed so I reviewed her whole discography. This album, in particular, has a little bit of everything she will pursuit during her career. And it is lovely.

Definitely the first album where she puts forward a consistent, own sound she'll pursue and try to improve on albums after this one.

Your feedback for Homogenic