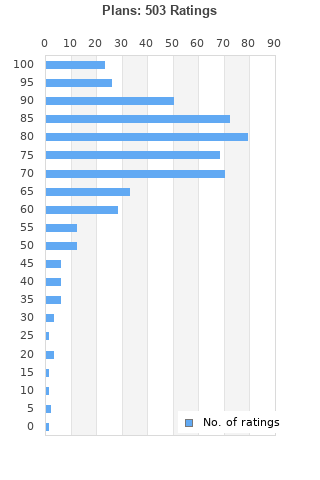 Plans is ranked 2nd best out of 15 albums by Death Cab For Cutie on BestEverAlbums.com.

The best album by Death Cab For Cutie is Transatlanticism which is ranked number 389 in the list of all-time albums with a total rank score of 4,965. 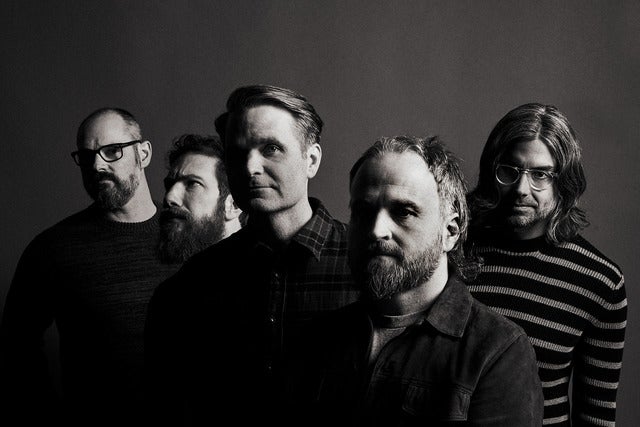 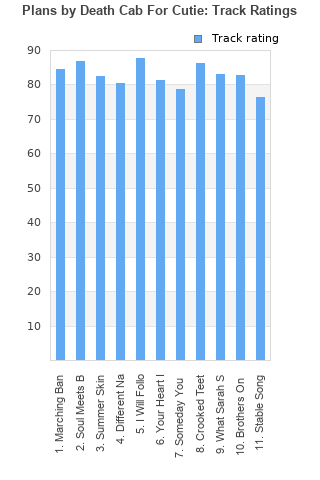 Rating metrics: Outliers can be removed when calculating a mean average to dampen the effects of ratings outside the normal distribution. This figure is provided as the trimmed mean. A high standard deviation can be legitimate, but can sometimes indicate 'gaming' is occurring. Consider a simplified example* of an item receiving ratings of 100, 50, & 0. The mean average rating would be 50. However, ratings of 55, 50 & 45 could also result in the same average. The second average might be more trusted because there is more consensus around a particular rating (a lower deviation).
(*In practice, some albums can have several thousand ratings)
This album is rated in the top 8% of all albums on BestEverAlbums.com. This album has a Bayesian average rating of 76.0/100, a mean average of 74.7/100, and a trimmed mean (excluding outliers) of 76.1/100. The standard deviation for this album is 17.0.

I'm not sure why, but I just find this kind of music incredibly depressing and sad. Not in a good 'I will learn something from this sadness way', it just sounds like music they play when someone dies on a TV show to me. Not all songs on this album are like that, but a lot of them are.

This album contains a lot of my favorite DCFC songs:
Marching Bands Of Manhattan
Soul Meets Body
Summer Skin
Different Names For The Same Thing
What Sarah Said
Brothers On A Hotel Bed

All those hits force me to rate this album high. However, I don't think it is their more cohesive album. Narrow Stairs and The Photo Album sound more like great albums to me, even though they might have a few less hit songs. Plans is great because many songs in it are great, as those other two are just great albums because of how you can listen to them as a whole and feel a sense of continuity and greatness.

That being said, I love Plans and "What Sarah Said" has to be one of the most touching song I ever heard, I can hardly listen to this song without crying even after all those listens.

I do like me a nice slice of Indy Pop yet somehow the D.C.F.C catalogue had completely passed me by ...until now

The absolute high point for me was "Crooked Teeth" , followed by the other 2 album singles "Soul Meets Body" and "I Will Follow You Into The Dark"

I'm so glad I've connected with D.C.F.C and 'Plans' , I'll definitely be digging deep into their remaining albums

I wish I could give this album a perfect score but the three duds on it (Different Names For The Same Thing, Someday You Will Be Loved, and Stable Song) prevent me from doing so. All the other songs are wonderful. But it's particularly hard for me not to skip the three I have mentioned whereas Transatlanticism arguably has no duds. Overall, the album is still amazing and is definitely worth your time. Especially good album for late summer early fall. Highlights: Marching Bands of Manhattan, Soul Meets Body, I Will Follow You Into The Dark and Crooked Teeth. I feel awful not mentioning many other songs.

Death Cab's appeal is not universal because at their core they are a soft alternative emo band that lives unabashedly on the emotion of bittersweet.

For the people that can plug into this emotional vulnerability, Plans is a real treat.

Stable and Someday You Will be Loved are throwaways.

I really like What Sarah Said but I can see why it lacks appeal; it is repetitive and takes far too long to find out what sarah said. Ditto for Brothers on a Hotel Bed.

It's track 1-5 run is excellent and repeat listens add to it's appeal.

Plans and Transatlanticism before are it are the height of Death Cab popularity and excellence.

Overall this is a good soft alternative rock album...an easy and pleasant listening.

The most accessible and well-constructed Death Cab album, chock full of beauty and timeless songs.

I think the singles from this album are among Death Cab's best, but many of the tracks are forgettable. It's a decent album that struggles living up to its predecessor.

While I may have spent lots of time in middle school listening to albums by Pink Floyd, Green Day, Weezer, The Beatles, Radiohead, Gorillaz, and even Fall Out Boy, Plans is the album that got me into music. It made me want to listen to other things, and to really expand my palette. This is easily one of the most important albums I've ever come across. Even then, it's still a solidly written and produced masterwork.

Your feedback for Plans