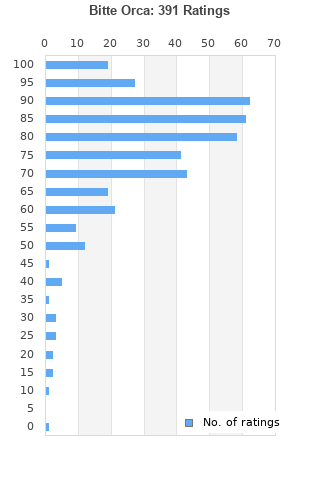 Bitte Orca is ranked as the best album by Dirty Projectors. 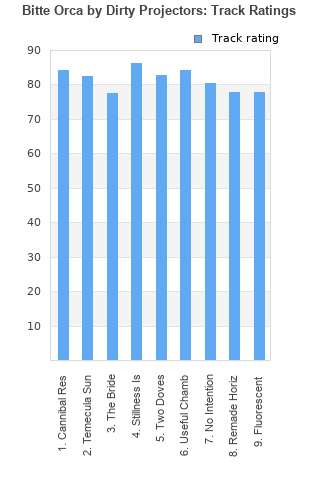 Stillness Is The Move
Rating: 86 (86 votes)Comments:

Rating metrics: Outliers can be removed when calculating a mean average to dampen the effects of ratings outside the normal distribution. This figure is provided as the trimmed mean. A high standard deviation can be legitimate, but can sometimes indicate 'gaming' is occurring. Consider a simplified example* of an item receiving ratings of 100, 50, & 0. The mean average rating would be 50. However, ratings of 55, 50 & 45 could also result in the same average. The second average might be more trusted because there is more consensus around a particular rating (a lower deviation).
(*In practice, some albums can have several thousand ratings)
This album is rated in the top 2% of all albums on BestEverAlbums.com. This album has a Bayesian average rating of 78.8/100, a mean average of 77.5/100, and a trimmed mean (excluding outliers) of 79.0/100. The standard deviation for this album is 16.4.

There are some fantastic cuts on this record which make it well worth a listen if you haven't heard it before. The vocal is very unique and gives consistently great performances throughout which is the highlight of the album. There is also some great instrumentation in places, mainly the guitar work, on songs like Cannibal Resource, Stillness Is The Move and Temecula Sunrise. The other songs bare a few are quite instrumentally weak and do feel a little repetitive which can also be said about the album on the whole. You do get a bit bored by the ending tracks which is bad for such a short album. Overall, a good record that is missing consistency in terms of quality of song but it does have moments well worth listening to.

I am constantly amazed by this album, its ageing like the finest of wines. With every listen i love it more than i did before. It makes me abit sad how underrated it is on this website. It deserves to be up there with AnCo, xx and Grizzly Bear.

Good album , but nothing excellent here, the vocals are very good but falls into boring if you listen it complete

Pretty good album! A bit inconsistent, but Stillness is fantastic

Dirty Projectors has a sound that upon first listen can be fairly hard to listen to. That being said, after repeated listens, one can easily begin to appreciate the genius that is their music. Crazy syncopated rhythms, bizarre vocals, as well as insane guitar parts culminate into one of the year's best avant garde albums. Kudos Dirty Projectors.

This album feels like it's on the brink of insanity. It just goes and goes and then every now and then, a little insanity shows (this is most prevalent in "Useful Chamber"). The instrumentation here is incredible too, some incredible guitar work. One of the most unique albums I've ever heard.

A very influential album preceding my twenties. I thought two things when I heard this album: 1.) I've never heard a male voice like this accompanied by this type of instrumentation 2.) "No Intention" is one of the most beautiful songs I had heard.

It's very hard to describe this album or even merely to categorize it. Simply labeling it "indie rock" is doing this album and Dirty Projectors a massive disservice. The album opens with a reverbed guitar sounding as though it were straight from 69', but as the opener progresses the female back-up vocals are introduced and it is these back-up vocals which i believe give the album it's spirit and "soul". The songs can go from frivolous guitar picking experimenatation to soulful melodic music just with harmonizing collective vocals of Amber Coffman and Haley Dekle. The group as a whole is obviously incredibly dynamic and the erratic and unpredictable music on this record is a testament to that. There are no musical boundaries in Bitte Orca yet unlike many other Experimental Records you actually feel like you can have fun with these songs and dance around to them. The standout track for me would either be the opener "Cannibal Resource" or the semi-seductive "Stillness is the move"- which is the closest the album ever gets to having anything sound faintly like pop. In short, there's plenty of awkward picking, plenty of harmonized female vocals and plenty of utterly brilliant instrumentation. This album is very cool and sometimes quite fun without sounding like the band is trying too hard.

Your feedback for Bitte Orca