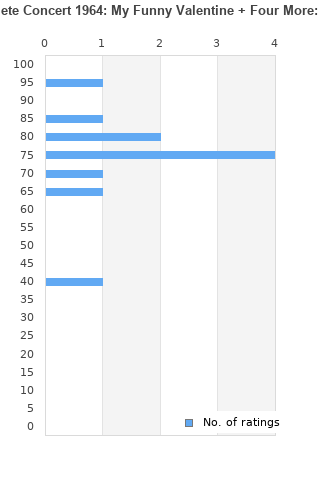 The Complete Concert 1964: My Funny Valentine + Four More is ranked 68th best out of 111 albums by Miles Davis on BestEverAlbums.com.

The best album by Miles Davis is Kind Of Blue which is ranked number 39 in the list of all-time albums with a total rank score of 30,183.

Listen to The Complete Concert 1964: My Funny Valentine + Four More on YouTube

No tracks have been rated on this album yet.
#
Track
Rating/Comments
1.
Introduction By Mort Fega
Rating: Not enough dataComments:

0
3.
All Of You
Rating: Not enough dataComments:

0
6.
All Blues
Rating: Not enough dataComments:

0
7.
I Thought About You
Rating: Not enough dataComments:

0
8.
So What
Rating: Not enough dataComments:

0
14.
There Is No Greater Love
Rating: Not enough dataComments:

Rating metrics: Outliers can be removed when calculating a mean average to dampen the effects of ratings outside the normal distribution. This figure is provided as the trimmed mean. A high standard deviation can be legitimate, but can sometimes indicate 'gaming' is occurring. Consider a simplified example* of an item receiving ratings of 100, 50, & 0. The mean average rating would be 50. However, ratings of 55, 50 & 45 could also result in the same average. The second average might be more trusted because there is more consensus around a particular rating (a lower deviation).
(*In practice, some albums can have several thousand ratings)
This album is rated in the top 13% of all albums on BestEverAlbums.com. This album has a Bayesian average rating of 75.4/100, a mean average of 77.5/100, and a trimmed mean (excluding outliers) of 77.5/100. The standard deviation for this album is 7.8.

This album combines two previously released albums that were compiled and released at separate times in 1965 "My Funny Valentine" and 1966 "Four & More", both were recorded on the same evening at a Miles Davis Benefit Concert for the 1964 Voter Registration Campaigns for voters in Mississippi and Louisiana - and with the onset of the Compact Disc era could be combined into a complete portrayal of that concert in one album. (Both of the previous albums also have individual entries here at BEA).

In the 1992 liner notes, Davis revealed that he had never heard each individual in his band play any better than they performed this night. He attributed much of the focus/precision/emotion to the tension within the group because Davis had made the decision that all of the performers would be donating their services for that concert and that none of them would be paid. Whatever motivated these performances, it is tremendous to hear the quintet perform and improvise with such naturalness and fluidity. Davis himself knows when to lead and when to follow, but at the end of the night you will know you'd listened to "The Miles Davis Quintet!" Perhaps in this complete form this is among The Greatest Live Albums of All Time.

Your feedback for The Complete Concert 1964: My Funny Valentine + Four More