Lost In Transition (studio album) by Sixpence None The Richer 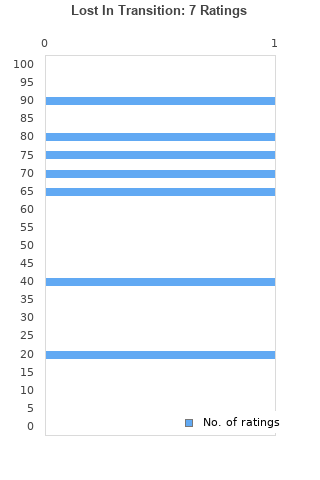 Sorry, no matches on eBay for "Lost In Transition Sixpence None The Richer".
See full search results on eBay

Sixpence None The Richer bestography

Lost In Transition is ranked 2nd best out of 7 albums by Sixpence None The Richer on BestEverAlbums.com. 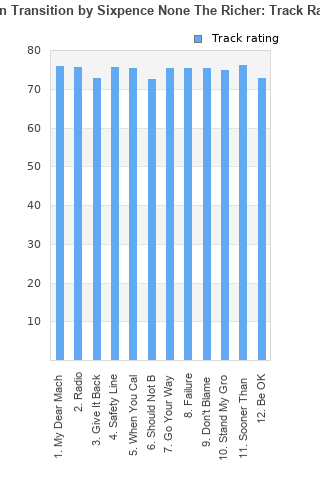 "Lost in Transition" is the first real Sixpence None the Richers album since 2002s "Divine Discontent". Problems with their record label made in 2004 key members, songwriter and guitarist Matt Slocum and singer Leigh Nash temporarily disband the group.

Leigh Nash released in 2006, her neglected masterpiece "Blue on Blue", which had song contributions from Matt Slocum, but also showed Nash herself as a very competent songwriter. This album can only be recommended in the warmest, and it measures the absolute with the best of Sixpence None the Richer; most of the songs actually sound like Sixpence recordings.

Fortunately Slocum and Nash reformed SPNTR in 2008. An excellent download-only EP, "My Dear Machine" was released and soon after came a Christmas album "The Dawn of Grace" with among other great songs included a fine version of Joni Mitchell's "River".

New problems and delays unfortunately turned up again and the release a new album, originally intended to be called "Strange Conversations", was constantly postponed. Now finally the songs are out now released as "Lost in Transition"; a title that makes good sense.

Since the release of "My Dear Machine" I have eagerly awaited this release, which is now thankfully turns out to be worth waiting for. They have wisely chosen to include the song "My Dear Machine" in the original 2008 version. This is simply a great song. To my ears, the song has everything a hit needs, that is one with lasting qualities. A catchy melody, great riffs (horns), intelligent lyrics which leave room for interpretation and a perfect vocal performance by Leigh Nash. Should be a hit. A classic for the group.

Two other songs from the 2008 EP are found here in new recordings. Not least, Leigh Nash's moving "Sooner Than Later" is a highlight on the album. "Give it Back" has a new title, but is actually a new recording of "Amazing Grace"

The album is generally characterized by fine songwriting, and especially Matt Slocum shows great versatility. In addition to "My Dear Machine" songs like "Radio" and "Do not Blame Yorself" are written in the same catchy power-pop style such as their early hit "There She Goes". The beautiful ballad "Safety Line" is also written by Slocum.

A plaintive mood characterizes parts of the album; particularly in a song like "Failure". One song, "I Do", is only available as mp3 download. Yet another fine number that should have been included on the CD.

According to Leigh Nash a new album already in mind. Hopefully we won't have to wait so long this time.

Your feedback for Lost In Transition