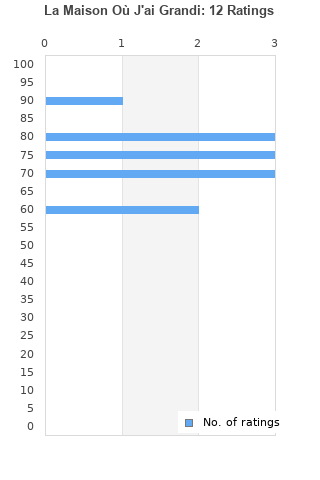 The best album by Françoise Hardy is La Question which is ranked number 3021 in the list of all-time albums with a total rank score of 506. 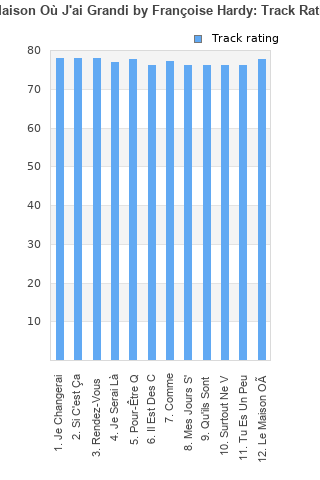 Rating metrics: Outliers can be removed when calculating a mean average to dampen the effects of ratings outside the normal distribution. This figure is provided as the trimmed mean. A high standard deviation can be legitimate, but can sometimes indicate 'gaming' is occurring. Consider a simplified example* of an item receiving ratings of 100, 50, & 0. The mean average rating would be 50. However, ratings of 55, 50 & 45 could also result in the same average. The second average might be more trusted because there is more consensus around a particular rating (a lower deviation).
(*In practice, some albums can have several thousand ratings)
This album has a Bayesian average rating of 73.3/100, a mean average of 73.8/100, and a trimmed mean (excluding outliers) of 73.8/100. The standard deviation for this album is 8.2.

The title track of this album was one of Hardy's biggest international hits, and one of the few singles that Hardy did not write herself. In fact, it is an Italian song, which has been given new French lyrics.

Charles Blackwell was still arranger and producer for Hardy, and this album could perhaps be seen as the final chapter of Hardy's early career as a pop-singer. The following albums showed a more mature Hardy, who gradually took distance to her image as a pure pop singer.

The album has as usual a lot of great songs, among which most were written by Hardy herself. Some of the most significant song were this time written by outside composers such as the title track, the exquisite "Rendez vous d'automne" (Bourgeois/Riviere) and "Je changerais d'avis" (Morricone/De Chiara).

Many of Hardy's own songs are obviosly great too - favourites are "Si c'est ca", "Peut-etre que Je t'aime" and "Comme"