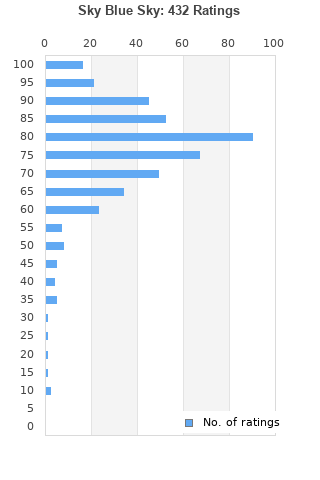 Sky Blue Sky is ranked 5th best out of 19 albums by Wilco on BestEverAlbums.com.

The best album by Wilco is Yankee Hotel Foxtrot which is ranked number 48 in the list of all-time albums with a total rank score of 24,565. 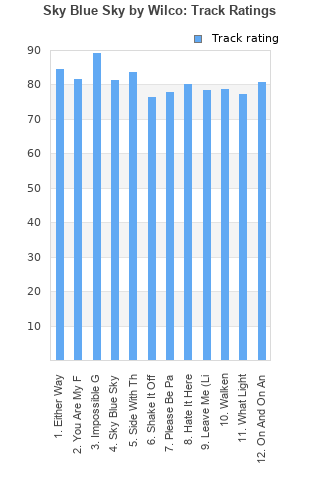 Rating metrics: Outliers can be removed when calculating a mean average to dampen the effects of ratings outside the normal distribution. This figure is provided as the trimmed mean. A high standard deviation can be legitimate, but can sometimes indicate 'gaming' is occurring. Consider a simplified example* of an item receiving ratings of 100, 50, & 0. The mean average rating would be 50. However, ratings of 55, 50 & 45 could also result in the same average. The second average might be more trusted because there is more consensus around a particular rating (a lower deviation).
(*In practice, some albums can have several thousand ratings)
This album is rated in the top 6% of all albums on BestEverAlbums.com. This album has a Bayesian average rating of 76.4/100, a mean average of 75.7/100, and a trimmed mean (excluding outliers) of 76.5/100. The standard deviation for this album is 14.5.

In which Wilco go all-in on Dad Rock. Sky Blue Sky sounds like Steely Dan on a mediocre day, led by an uninspired John Lennon. I enjoy Dad Rock immensely, but this record too drawn out, with nothing heartfelt, creative or funny. It's mostly half-baked ideas. Hate it Here attempts to be funny, but nothing makes me identify with the loser protagonist.

My least visited Wilco album after Ode to Joy

It's not quite up to Yankee Hotel Foxtrot and A Ghost Is Born, but there are still some nice tracks. My highlights are Either Way, Sky Blue Sky and Impossible Germany.

This is an extremely mellow and relaxing album and it really captures the chilled out vibe that it was going for. Also, there are some great tracks on here as well such as Either Way and Impossible Germany. The album on a whole has amazing guitar work but those two songs really demonstrate the peak of that. The lyrical content is interesting and fun to look into which it always is on Wilco albums. The vocal delivery is strong as well and is a real highlight for me. However, this album does have its weak points such as its slow nature and a few average/filler tracks. An example of this is the song Shake It Off. Overall, I think this record gets over hated due to the quality of their previous records but this album is actually of quite a high quality and shows a different side to Wilco which I thoroughly enjoyed.

MUCH less pretentious, which is MUCH better. Still it doesn't incite any strong emotions in me. Don't know why I shouldn't grab any other folk artist; I don't suppose anyone actually enjoys the tame, uncontroversial guitar solos? It's just there so you can say "it draws inspiration from so much genres!"; execution plays a rather vital role here, kiddo. With all the pretenses of rock gone, there is a cute folk album underneath, but something Simon & Garfunkel could've made in the '60s too.

Impossible Germany is a great song. Mostly average after that

If you listen to this expecting something like Yankee Hotel Foxtrot, you'll probably end up disappointed. But if you remove such expectations, you'll find a very solid album. Sure, it might not feel as grand or experimental as some of their previous work, and it does drag a little here and there, but by no means does that make this album bad or boring. It has a great deal of gorgeous songwriting, with "Either Way," "On and On and On," and "Impossible Germany" being some of my favorites. Also, the guitar work is on point. If you're looking for a more mellow Wilco album, you'll definitely enjoy this one.

Just like their previous albums, this one feels so good to listen, Tweedy's voice is so calm, and The overall mood of It is so silent. It is one of those albums that is bound to make you feel at least a little bit better.

Not as experimental as what came before, but it didn't need to be. Just a bunch of good songs, though some are just OK. It's not perfect, but Nels Cline's guitar playing is enough to make me come back to this, as well as the very pristine production, which is lovely to listen to.

It didn't take long for me to love this album more than the ones before. My favorite group of the last 15 years, it just spoke to me at the right time and loved how simple it stayed focussed and not falling for some noisy experimentation, although that is why I love their previous albums. Wouldn't surprise me if it gets higher in the charts a decade from now,

Your feedback for Sky Blue Sky