A Wizard, A True Star (studio album) by Todd Rundgren 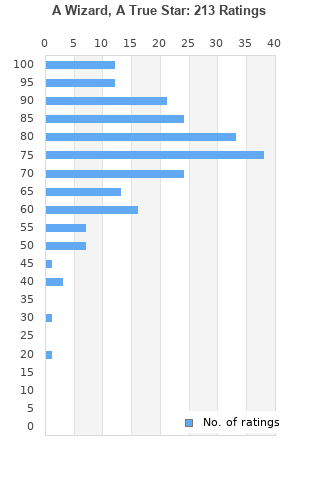 A Wizard, A True Star is ranked 2nd best out of 25 albums by Todd Rundgren on BestEverAlbums.com.

The best album by Todd Rundgren is Something/Anything? which is ranked number 1084 in the list of all-time albums with a total rank score of 1,692.

Listen to A Wizard, A True Star on YouTube 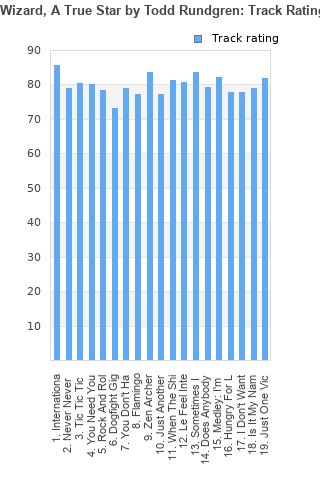 A Wizard, A True Star rankings

A Wizard, A True Star collection

A Wizard, A True Star ratings

Rating metrics: Outliers can be removed when calculating a mean average to dampen the effects of ratings outside the normal distribution. This figure is provided as the trimmed mean. A high standard deviation can be legitimate, but can sometimes indicate 'gaming' is occurring. Consider a simplified example* of an item receiving ratings of 100, 50, & 0. The mean average rating would be 50. However, ratings of 55, 50 & 45 could also result in the same average. The second average might be more trusted because there is more consensus around a particular rating (a lower deviation).
(*In practice, some albums can have several thousand ratings)
This album is rated in the top 5% of all albums on BestEverAlbums.com. This album has a Bayesian average rating of 76.8/100, a mean average of 76.5/100, and a trimmed mean (excluding outliers) of 77.0/100. The standard deviation for this album is 13.8.

A Wizard, A True Star favourites

A Wizard, A True Star comments

This is what Styx was trying to be, but it's actually good.

run of the mill try too hard

An Abbey Road-esque collage of... sigh, okay let's not try to avoid the elephant in the room: the "haha I'm so crazy", "there's not such a thing as too much sound effects" intermezzos are not fun, just not. If you listen to that and on the other side of the record you see someone else than Gene from Bob's Burgers playing on his keyboard, I don't know what myriad of excuses keep screaming in your head "no, it's not that bad", "it's a product of its time" etc. It seems like it's all about showing off and the music being actually nice to listen to is put on second place.

When you arrive at "zen archer" you hear that he's still got it: the great songwriting skills, the cute atmosphere that keeps you in the right flow, but after the hundredth arrow that hits a wooden board you apologize to your ears. On a song like "helter skelter" such an over-the-top aggressive ending works, because the song was already aggressive; for Rundgren, whose best attribute is the laid-backness in his music, it just rubs you wrong. You just end it on a bad tone.

But I won't: near the ending of the album he calms down and keeps things more simple and tasteful.

How this thing is a 77 and some trendy new band like Beach House have multiple albums above 80 just blows me away. Todd was such an innovator and this thing has so many great grooves and riffs and feels on it. Yeah the whole monkey sex track and some of the weird sounding off-kilter instrumental-only tracks fall flat, but those are like 2 minutes a piece. There is so much great content on here that stands out that it's a shame such a gem is otherwise ignored on this site that has unearthed so many other hidden gems for me.

A brilliant album showing Todd at his peak as a songwriter. "International Feel", "Does Anybody Love You?", and "Just One Victory" are all-time great tracks. There's always something going on, and almost always something different will be happening very soon, which keeps it interesting.

Todd Rundgren is a genius. I got into after Tame Impala listed his as one of the main influences for their album Lonerism. I listening to him I fell in love with his music. He has a very distinct style and its god damn good

Apparently heavily influenced by the use of LSD, admittedly a few years later than most bands, a wizard,a true star is a wonderfully messy and ambitious album. It definitely needs to be listened to in a couple of sittings to take It all in. It's a lot of fun and features a beautiful medley of soul tracks about two thirds of the way through. This album might go in one ear and out the other initially, but stick with it, it will grow on you

I really enjoyed this. I can definitely see how this influenced albums like Lonerism.

Your feedback for A Wizard, A True Star