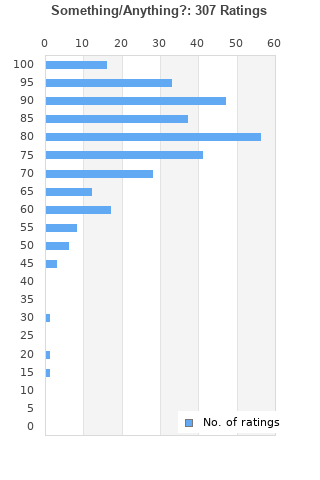 Something/Anything? is ranked as the best album by Todd Rundgren. 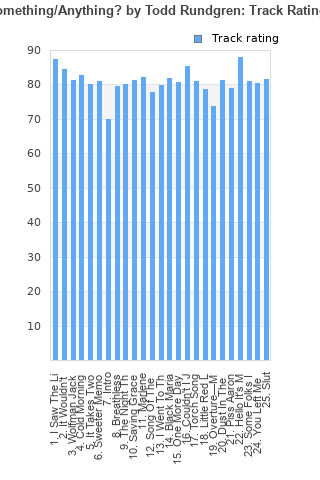 Rating metrics: Outliers can be removed when calculating a mean average to dampen the effects of ratings outside the normal distribution. This figure is provided as the trimmed mean. A high standard deviation can be legitimate, but can sometimes indicate 'gaming' is occurring. Consider a simplified example* of an item receiving ratings of 100, 50, & 0. The mean average rating would be 50. However, ratings of 55, 50 & 45 could also result in the same average. The second average might be more trusted because there is more consensus around a particular rating (a lower deviation).
(*In practice, some albums can have several thousand ratings)
This album is rated in the top 2% of all albums on BestEverAlbums.com. This album has a Bayesian average rating of 80.0/100, a mean average of 79.6/100, and a trimmed mean (excluding outliers) of 80.2/100. The standard deviation for this album is 13.6.

Such a wonderful album from start to finish, made all the better by the studio chatter in a bunch of the tracks. It's a little front-heavy, but I think every song on this album is worth at least one listen.

I appreciate this more for the ambition than the actual songs, but I could see that changing as I age with them.

I got exactly what I was expecting for. Somewhat generic 70s rock and roll sometimes verging on hard rock. But man, the songs are great!

The best of the overproduced late '60s. As with most artists that come a bit late to the party, you kinda wished the thing it reminisces actually sounded like it. A bit more catchy, production a bit too perfect, more crazy sound effects that the studio era has brought to flex on them girls. And that's exactly what that era had brought, now composition was something not only for classical music, now nerds could be cool, something that would become very clear in ten years. A hint- no, a whiff- no, a small breeze of new wave can be heard on "breathless", a joke about that weird-ass talkbox that sounds like you're in sleep paralysis and trying to scream. He's just joking around; he got all this technology and knows not the direction to take it in, so he does everything/anything, hell you should be able to do SOMEthing with all that goods that science brought. It has its charm to it, and it is remarkable on itself. And I feel like he doesn't take it too far on this album; he knows when to stop to keep things tasteful.

One of the most underrated albums and artists of all time. Could it have been trimmed down? Like most records longer than an hour absolutely yes. But this album was so incredibly forward looking and just chock full of great music that it's unbelievable that more people aren't talking about Todd Rundgren.

Todd's White Album. For a double album it is remarkably consistent, and the highlights are spectacular. Lots to love here - brilliant record.

Your feedback for Something/Anything?