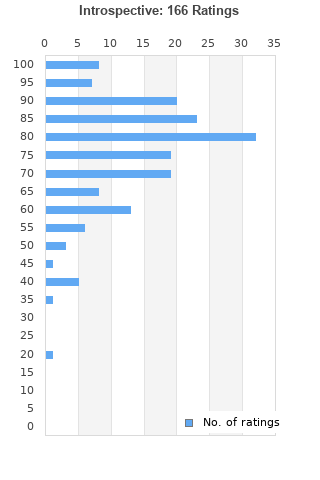 Pet Shop Boys - Introspective (UK Limited Triple Edition)
Condition: Used
Time left: 7h 36m 43s
Ships to: Worldwide
$59.00
Go to store
Product prices and availability are accurate as of the date indicated and are subject to change. Any price and availability information displayed on the linked website at the time of purchase will apply to the purchase of this product.  See full search results on eBay

Introspective is ranked 3rd best out of 25 albums by Pet Shop Boys on BestEverAlbums.com.

The best album by Pet Shop Boys is Actually which is ranked number 1550 in the list of all-time albums with a total rank score of 1,134. 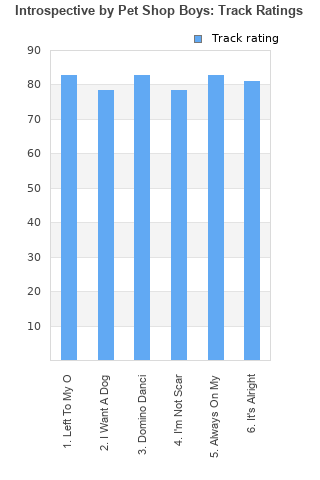 Rating metrics: Outliers can be removed when calculating a mean average to dampen the effects of ratings outside the normal distribution. This figure is provided as the trimmed mean. A high standard deviation can be legitimate, but can sometimes indicate 'gaming' is occurring. Consider a simplified example* of an item receiving ratings of 100, 50, & 0. The mean average rating would be 50. However, ratings of 55, 50 & 45 could also result in the same average. The second average might be more trusted because there is more consensus around a particular rating (a lower deviation).
(*In practice, some albums can have several thousand ratings)
This album is rated in the top 10% of all albums on BestEverAlbums.com. This album has a Bayesian average rating of 75.7/100, a mean average of 75.5/100, and a trimmed mean (excluding outliers) of 75.9/100. The standard deviation for this album is 14.8.

Not a massive PSB fan, but I adore Left to My Own Devices so I thought I'd give it a go. And although this is not really my bag, I enjoyed it, particularly the extended Always On My Mind/In My House.

Having conquered synth pop with their two previous LPs, the duo decided dance music was next in their sites. Introspective is House music the whole family can dance along to. Their classic pop brilliance is still there, but it's lengthened out and doused in a healthy dose of acid-influenced synths.

It lacks the depth that made their previous two releases so good, but at the same time offers a lot more contemporary house albums of the time thanks to its radio-friendly credentials. And as always, Neil Tennant's voice is fantastic.

The drama in that orchestration on Left To My Own Devices immediately capture an essential feeling of tension. Always On My Mind is the real high point of the record, and indeed is one of my favourite covers of all time, though it's certainly matched by the groovy I Want A Dog and the poetically dystopian It's Alright, which also happens to add another excellent socio-political pop track to the PSB's roster.

An outstanding bridge between pop and house that doesn't end up being weak for trying to compromise between the two. An essential late 80s record.

On their previous album "Actually", I complimented the Pet Shop Boys with respect to them "allowing their tracks to stretch out a bit"... well this takes that up a notch as all 6 tracks range from over 6 minutes to just under 10, and we're all the better for it. "Introspective" thematically flips the switch and lets the light in, from songs about self-reliance to hope and love. These tracks are well-produced, very catchy and never overstay their welcome. What more could you ask for from a dance-pop duo?

A very dancy album from the Pet shop boys. It's a very good record, a worthy, yet different follow up to the excellent, Actually. Not quite great, but very good.

Well that was a lovely end to an album. Feel myself more hopeful than before.

Influenced by the Acid House boom in England at the time and it shows! Love 'I Want A Dog' and 'It's Alright'. Classic.

Your feedback for Introspective