The Miracle (album) by Queen 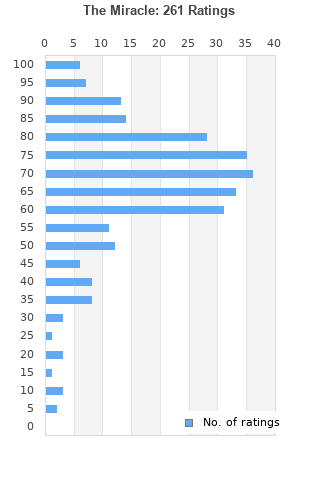 The Miracle is ranked 12th best out of 46 albums by Queen on BestEverAlbums.com.

The best album by Queen is A Night At The Opera which is ranked number 86 in the list of all-time albums with a total rank score of 17,828. 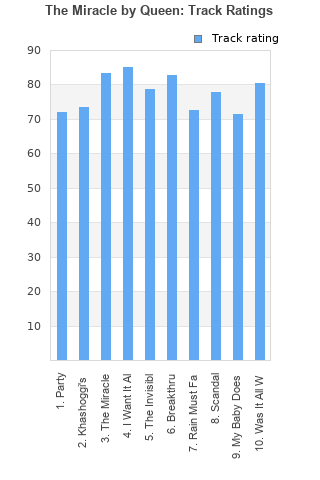 Outliers can be removed when calculating a mean average to dampen the effects of ratings outside the normal distribution. This figure is provided as the trimmed mean. A high standard deviation can be legitimate, but can sometimes indicate 'gaming' is occurring. Consider a simplified example* of an item receiving ratings of 100, 50, & 0. The mean average rating would be 50. However, ratings of 55, 50 & 45 could also result in the same average. The second average might be more trusted because there is more consensus around a particular rating (a lower deviation).
(*In practice, some albums can have several thousand ratings)
This album has a mean average rating of 65.0/100. The trimmed mean (excluding outliers) is 66.0/100. The standard deviation for this album is 19.0.

One of the most positive Queen album

I remember buying this when I still loved queen as a kid. I want it all single gave hope of something good. Alas, no. File next to hot space and flash that, unless you are a completest, you really don't need.

Along with Flash and Hot Space 3 Queen albums I don't possess,'Breakthru', 'I Want It all' best here,I wouldn't miss the rest of the album.

I could live listening to Breaktrough all day, it's such a powerful rythmic song. The miracle song has great moments and I want it all is a great rock tune. Invisible man is worth the punchy bass&drums line -impossible not to follow it tapping the foot- and that's it. The rest is just no good. Party, Rain must fall and My baby does me are specially awful.

This was queen's first album in three years after a kind of magic. In truth, it has only one really good track in I want it all. The rest is a cross between good and terrible. Good stuff is was it all worth it, breakthru and scandal. The invisible man and the title track are ok, but rain must fall and my baby does me are awful. That it took three years to make with the talent that band has it's extremely disappointing. They were better than this, and I just feel that was a problem with queen in the eighties, they didn't quite have the hunger or the edge they had in the previous decade. Still, the crazy thing is that, the miracle, really is fun if you don't take it to seriously. One more thing, I wonder if the album was originally intended as a concept. Party, is the band getting together, and off course, ending with, was it all worth it. Throw scandal in there to and you might have a rock'n'roll story.

This will always be one of my favourite albums for personal reasons (it was the first album I ever bought back in 1989). History has judged it harshly, but when you have The Miracle, I Want It All and Was It All Worth It, it can't be all that bad. I think the two openers are among Queen's most "fun" tracks and even My Baby Does Me has a laid back vibe that is really rather good.

This album contains blatant great tracks like The Miracle and I Want It All, but also has the hidden gem (also my favourite song of all time for personal reasons) Was It All Worth it. Could do without the banal My Baby Does Me, and The Invisible man isn't really appealing to me. All in all, it's a good, however inconsistent album.

Unfairly judged as Queen's worst album quite often, when in actuality, this is probably their best album since 1980s the Game. Full of wonderful tunes, and only a few corny sidetrackers. The Miracle, I Want it All, Scandal, Hang on in There and Was it all Worth it are all primo Queen songs, and the only songs that could've been done away with are My Baby Does Me and Rain Must Fall.

Your feedback for The Miracle