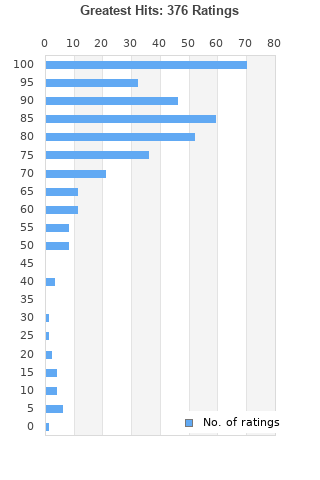 Greatest Hits is ranked 10th best out of 50 albums by Queen on BestEverAlbums.com.

The best album by Queen is A Night At The Opera which is ranked number 99 in the list of all-time albums with a total rank score of 14,961. 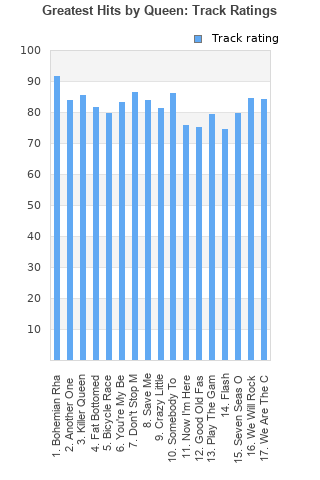 Somebody To Love
Rating: 86 (86 votes)Comments:

Rating metrics: Outliers can be removed when calculating a mean average to dampen the effects of ratings outside the normal distribution. This figure is provided as the trimmed mean. A high standard deviation can be legitimate, but can sometimes indicate 'gaming' is occurring. Consider a simplified example* of an item receiving ratings of 100, 50, & 0. The mean average rating would be 50. However, ratings of 55, 50 & 45 could also result in the same average. The second average might be more trusted because there is more consensus around a particular rating (a lower deviation).
(*In practice, some albums can have several thousand ratings)
This album is rated in the top 1% of all albums on BestEverAlbums.com. This album has a Bayesian average rating of 82.9/100, a mean average of 80.1/100, and a trimmed mean (excluding outliers) of 83.2/100. The standard deviation for this album is 20.2.

Not a big Queen fan so I'm never going to tempted to get any more of there studio albums. (I do have 2 studio albums and neither impress me at all) Hence this does me well. I like most of the songs on it.

I've listened to every track of this album so many time, that now it don't impresses me much. Great album, great band!

This and the Beatles red album and was all my parents played when I was small. I think. Don't pretend you don't like it. It's fine.

You couldn't ask for more than this greatest hits of their 70's work. Essential listening

It is just a pleasure listening to one of the greatest divas of all time. Mercury could take a decent song and push it to the next level, or two or three. A good collection of their better known songs.

I play this more than any of Queen's studio albums!

I love Queen, and have heard all of their records, but let's face it, they are better with songs, not albums.

Without a doubt the best compilation ever in a single CD along with Legend of Bob Marley. Every song is important and the flow is flawless, it almost fells like an actual album.

The best greatest hits compilation ever and the best possible CD to have in your car.

yeah just keep putting this in your charts instead of A Night at the Opera or A Day at the Races or Queen 2 or Sheer Heart Attack or News of the World or Jazz or The Game so this pointless thing can stay in the top 1000. wtf is wrong with you? a slap in the face to each album below this.