Pretty. Odd. (studio album) by Panic! At The Disco 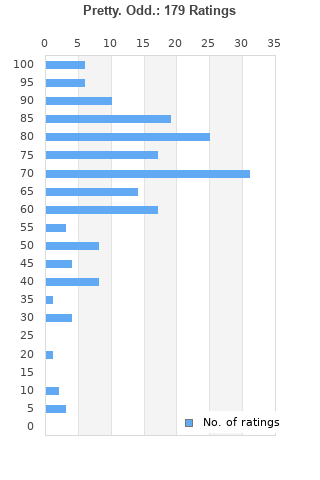 Panic! At The Disco bestography

Pretty. Odd. is ranked 2nd best out of 8 albums by Panic! At The Disco on BestEverAlbums.com.

The best album by Panic! At The Disco is A Fever You Can't Sweat Out which is ranked number 1290 in the list of all-time albums with a total rank score of 1,376. 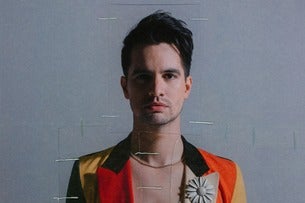 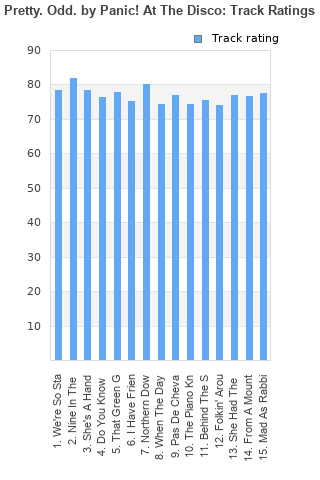 Rating metrics: Outliers can be removed when calculating a mean average to dampen the effects of ratings outside the normal distribution. This figure is provided as the trimmed mean. A high standard deviation can be legitimate, but can sometimes indicate 'gaming' is occurring. Consider a simplified example* of an item receiving ratings of 100, 50, & 0. The mean average rating would be 50. However, ratings of 55, 50 & 45 could also result in the same average. The second average might be more trusted because there is more consensus around a particular rating (a lower deviation).
(*In practice, some albums can have several thousand ratings)
This album has a Bayesian average rating of 70.6/100, a mean average of 68.6/100, and a trimmed mean (excluding outliers) of 70.4/100. The standard deviation for this album is 19.3.

First of all: THAT INTRO OMG. Even rap has never dared to be so straight-forward.

They've become a bit more traditional with their instruments, but manage not to sound as out of touch with the real world as other indie bands that also want to make the best of the violin lessons their parents forced them on. It still sounds like pop punk first and foremost with a more classical instrumentation, just like baroque pop is rock 'n' roll on the surface (yeah the name is a bit wrong). They succesfully sound like baroque pop punk, while Arcade Fire or Animal Collective's Feels sounds like weird, genreless shit no one ever listens to. Classical and rock just don't mix (neither jazz with both of 'em); you can only put them next to each other. So keep it simple.

Much like Motley Crue's Dr. Feelgood, this is the sound of a subpar band trying to write to the best of their ability, although much better than anything Motley Crue ever did. This album sounds like a group of kids trying their best to imitate the Beatles and the Beach Boys and they do a very good job while adding some personal flair of their own. Unfortunately, Pretty. Odd. didn't achieve the commercial success that Dr. Feelgood did and Panic! At The Disco reverted back to their old ways.

This has got to be one of the most slept on albums ever! It physically pains me how everyone decided to just not notice it. I still have hope that someday it will become a classic that was overlooked in its time.

It's like the Beatles, the Beach Boys, and Panic! were put into a blender and what came out was an amazing music-smoothie

I find this album being rated in the low 70's to be pretty odd. It's a pleasant listen. I can dig it.

It's a very basic and simple work but somewhat timeless but not exactly classic. You can obviously draw the influences from Sgt.Peppers by The Beatles, which a lot of people might think of as complete copies if they realize it, which I don't think is a correct assumption. This is something that was made out of a burst of inspiration it seems and a very lovely one it is.

Your feedback for Pretty. Odd.