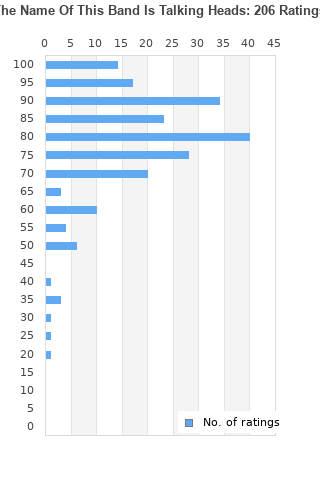 3/4/82PN49 Advert: the Name Of This Band Is Talking Heads Live 2 Lp Set 15X5"
Condition: Good
Time left: 7h 37m 3s
Ships to: Worldwide
£10.00
Go to store
Product prices and availability are accurate as of the date indicated and are subject to change. Any price and availability information displayed on the linked website at the time of purchase will apply to the purchase of this product.  See full search results on eBay

The best album by Talking Heads is Remain In Light which is ranked number 30 in the list of all-time albums with a total rank score of 35,510.

The Name Of This Band Is Talking Heads track list 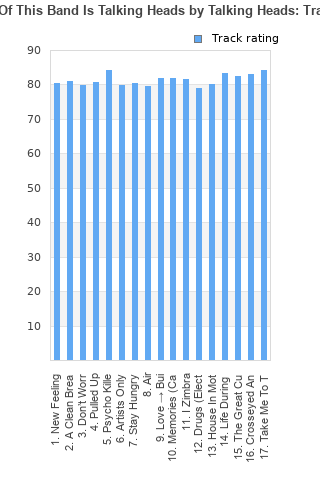 The Name Of This Band Is Talking Heads rankings

The Name Of This Band Is Talking Heads collection

The Name Of This Band Is Talking Heads ratings

Rating metrics: Outliers can be removed when calculating a mean average to dampen the effects of ratings outside the normal distribution. This figure is provided as the trimmed mean. A high standard deviation can be legitimate, but can sometimes indicate 'gaming' is occurring. Consider a simplified example* of an item receiving ratings of 100, 50, & 0. The mean average rating would be 50. However, ratings of 55, 50 & 45 could also result in the same average. The second average might be more trusted because there is more consensus around a particular rating (a lower deviation).
(*In practice, some albums can have several thousand ratings)
This album is rated in the top 2% of all albums on BestEverAlbums.com. This album has a mean average rating of 78.0/100. The trimmed mean (excluding outliers) is 79.4/100. The standard deviation for this album is 15.3.

The Name Of This Band Is Talking Heads favourites

The Name Of This Band Is Talking Heads comments

I dislike most live albums put out by bands but in my honest opinion this live album is outstanding, especially when you get to the Remain In Light section of the album. I prefer their live recording to their studio recordings. If you like this band then I recommend you try out this album for yourself. Even though I like the extended version much more than this one.

Expanded CD version is much better than this one that is listed.

It's important to note that the track listing here does not reflect the expanded CD version, which covers a total of 33 songs over two discs. The score I'm giving this album is based on that version, and more particularly its first disc. That disc contains only songs from the first three albums. Any songs from Remain in Light are relegated to the second disc. As much as you'd think that would make that second disc superior, it's just the opposite. They couldn't make the RiL songs sound as good live as they do on the original release, while the songs from the first three albums come off much better live. In fact, listening to the songs on the first disc, you begin to be suspicious that they weren't recorded live. Talking Heads couldn't be this tight live, they couldn't sound this clean, could they?? But they were. Moreover the crisp sound shows off just how good a songwriter David Byrne was in that era. Each song they rip into sounds better than the one before. Catchy hooks, intricate guitar interplay, harmonies, perfect rhythms, these songs have it all. Seriously, this is the best live album I've ever heard and is far superior to Stop Making Sense. By the time disc one finishes, you'll be in "Heaven".

A perfect summation of the band at their creative zenith.

Great live collection of a bunch of their best tracks.

A great example of a band being superior playing live. What performances. Definitely their best and a great collection, get the expanded.

Your feedback for The Name Of This Band Is Talking Heads