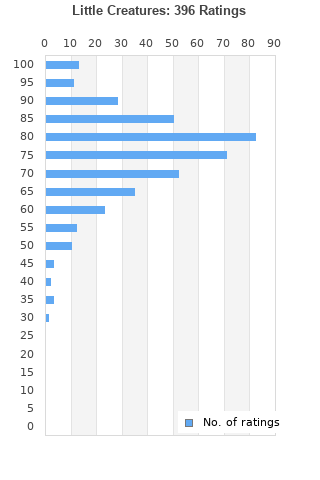 Little Creatures is ranked 7th best out of 15 albums by Talking Heads on BestEverAlbums.com.

The best album by Talking Heads is Remain In Light which is ranked number 29 in the list of all-time albums with a total rank score of 32,628. 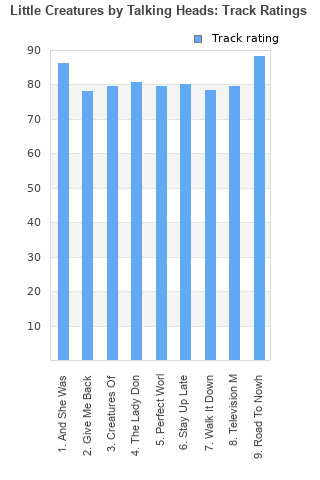 Rating metrics: Outliers can be removed when calculating a mean average to dampen the effects of ratings outside the normal distribution. This figure is provided as the trimmed mean. A high standard deviation can be legitimate, but can sometimes indicate 'gaming' is occurring. Consider a simplified example* of an item receiving ratings of 100, 50, & 0. The mean average rating would be 50. However, ratings of 55, 50 & 45 could also result in the same average. The second average might be more trusted because there is more consensus around a particular rating (a lower deviation).
(*In practice, some albums can have several thousand ratings)
This album is rated in the top 7% of all albums on BestEverAlbums.com. This album has a Bayesian average rating of 75.9/100, a mean average of 75.5/100, and a trimmed mean (excluding outliers) of 76.0/100. The standard deviation for this album is 12.1.

Am I the only person that thinks Give Me Back My Name is the best song on the album?

Although far from their best work, "Little Creatures" is still a highly enjoyable album with heart and lot of their signature quirkiness. A few riffs aren't amazing and the undeniably "eighties" vibe hasn't aged that well at certain point, but it's never annoying for long. This album shows above all, that even years after their high point, Talking Heads were still able to create classics like "And She Was" and "Road to Nowhere", apparently effortlessly.

Favorite: And She Was, Road to Nowhere, Television Man, The Lady Don't Mind

Certainly not up to the genius of their first four albums, still, little creatures, is a good Talking Heads album. Road to nowhere, and she was, and, creatures of love, are top TH songs, the rest not bad.

And She Was is a class opener and the whole album is a strong one...this was the first TH album I bought so some may think it commercial but it got me hooked. Downloaded the other albums but will be buying them on vinyl so commercial success I'd say...

Favorite Tracks: And She Was, Creatures Of Love, The Lady Don't Mind, Stay Up Late, Walk It Down, Road To Nowhere

Not one of their best, but still a solid record

A lot of people hate this album because it feels like a sell out, but if you listen the songs are really very good.

Your feedback for Little Creatures