I Bet On Sky (album) by Dinosaur Jr. 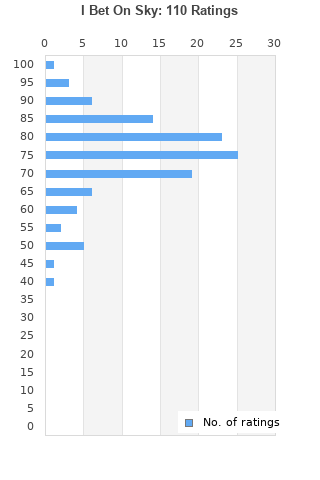 I Bet On Sky is ranked 7th best out of 17 albums by Dinosaur Jr. on BestEverAlbums.com.

The best album by Dinosaur Jr. is You're Living All Over Me which is ranked number 297 in the list of all-time albums with a total rank score of 6,620. 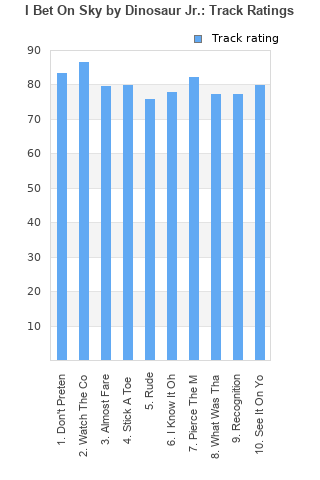 I Bet On Sky rankings

I Bet On Sky collection

I Bet On Sky ratings

Outliers can be removed when calculating a mean average to dampen the effects of ratings outside the normal distribution. This figure is provided as the trimmed mean. A high standard deviation can be legitimate, but can sometimes indicate 'gaming' is occurring. Consider a simplified example* of an item receiving ratings of 100, 50, & 0. The mean average rating would be 50. However, ratings of 55, 50 & 45 could also result in the same average. The second average might be more trusted because there is more consensus around a particular rating (a lower deviation).
(*In practice, some albums can have several thousand ratings)
This album has a mean average rating of 74.0/100. The trimmed mean (excluding outliers) is 74.2/100. The standard deviation for this album is 11.5.

I Bet On Sky favourites

I Bet On Sky comments

It's still the same simple songs played loudly, and it's still the signature sleepy vocal delivery. But it feels a touch more open than 2009's Farm. And like everything they've done since getting back together, it's really solid.

No flops and a unique punk/pop/80's/modern-day sound make this a unique album.

Dinosaur Jr. is one of those bands that, when they release an album, you know what you’re going to get. They’ve been together since 1984 and they’ve always remained true to themselves. They’ve been through hair metal, grunge, 90s alternative, those awkward, like, five years that emo was popular, they’ve been through it all and they’ve continued to sound good. “I Bet On Sky" is not their best album, it’s not something earth-shattering that is going to make Dinosaur Jr. fans say that this is their best. However, this album is quite good. Dinosaur Jr. just always sounds good, no matter what. Now there are songs here and there that aren’t so great, and they can get slightly formulaic, but overall the album is still the same gritty, punching guitar-driven music that we’ve all come to know and love from Dinosaur Jr. And as usual, J Mascis’ guitar playing is superb.

A great release from Dinosaur Jr. . One of my favorites of theirs. Watch The corners is def one of the best Rock tracks of 2012

Not a bad album, but a touch generic in what it does. Doesn't bring anything "new" to the table if you know what I mean. (Of course you do)

Watch the Corners was my fav track.

Brojob,Hunt the Dinosaur,Left To Suffer and More At Soundbar
Sounder, Orlando, United States.

Your feedback for I Bet On Sky